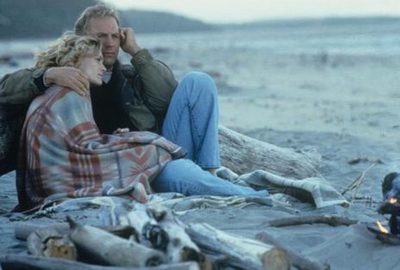 I’ve always felt a great film can reach through to any audience. I loved the action film Die Hard, and my father loved Shakespeare in Love, proving that target audiences can expand if the film is good enough. But then there are the films that choose to narrowly target their audiences, like I Know What You Did Last Summer and The Water Boy. But even those films, for all their shameless targeting at one particular demographic, managed to find alternative business. Not so with the current release Message in a Bottle. I have never been one to genderize anything, gosh knows, but here is where I must issue the warning. If you have ever wondered what a true “chick flick” looked like, look no further. Now, I remember thinking this when Sense and Sensibility came out, and, granted, that was a pretty convincing argument, but I would have to go out on a limb and take on the entire history of cinema and proclaim Message in a Bottle the absolute, ultimate, number one chick flick of all time. Guys, you’ve been warned.

That being said, the film is not all that bad. Message in a Bottle is one of those films that you have to go into with low expectations and you’ll be happily rewarded. It helped that I actually went to see it on Valentine’s Day with my sweetie, so maybe I was so suckered in that I couldn’t judge it fairly, but what’s wrong with that?! The first thing I’ve been asked by friends after the fact was “so how many guys were in the audience who were dragged there by their girlfriends?!” And I have had to answer “probably all of them!”

But that notwithstanding, and Valentine’s Day aside, Message in a Bottle really delivers what it promises. Starring Kevin Costner as a widower who can’t let go of his dead wife, the film is based on Nicholas Sparks’ (The Notebook) best-selling book of the same name. Robin Wright Penn plays Theresa, a lonely Chicago newspaper researcher who, while on vacation at the beach, finds a bottle washed up on the shore with a typewritten message inside. Unimaginably curious about the prose, written to a woman named Catherine (nice name) and sorrow-laden, Theresa goes about trying to find the person who wrote the letter, who signed it only “G.” When she does track the author down, he turns out to be Garret Blake, a ship restorer and builder who lives in the Outer Banks of North Carolina.

Driven half by curiosity and half by romantic longing, Theresa travels to North Carolina to meet Garret, and finds him to be everything a woman could conjure up in her dreams. The two do eventually fall in love, but the rest you’ll have to find out for yourself, but be reminded of my fair warning.

Robin Wright Penn is one of my favorite actresses, I will put that out on the table right away, but I was disappointed with her in this film. But perhaps that is because this film is not about acting. This is one of those films that transcends acting—it’s about mood, atmosphere and really romantic settings. And you couldn’t possibly find a more romantically shot film than this one, shot by cinematographer Caleb Deschanel (The Right Stuff, The Natural). You’ve got beautiful sailboats, walks along the beach, candlelit dinners inside a classic beachfront home, and sweeping shots of coastline, lighthouses and ocean waves. Picture perfect.

Director Luis Mandoki, who’s most memorable previous film was When a Man Loves a Woman, does offer up a brilliant treat in the casting of Paul Newman as Garret’s crotchety but sensitive father, Dodge. Newman is absolutely delightful and carries the film every time he’s on screen. He and Costner seem truly well-matched as father and son, and Costner admirably steps aside and lets Newman steal their scenes every time.

There are moments during this film that I imagined I would have enjoyed reading the book more than seeing this movie, but the film-makers deliver a pretty polished, enjoyable, if totally manipulative, product. Shamelessly targeted at the Valentine’s Day crowd, Message in a Bottle will live on in the video shelves for all eternity, there to forever torture men who, on their first dates, will sit through anything to endear themselves to their female companion.

Don’t say I didn’t warn you.

My rating: ** wait for video

Catherine’s video recommendations:
If you liked this movie, I recommend:
To Gillian on her 37th Birthday
Sleepless in Seattle