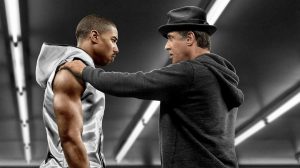 So it’s understandable that I’m more than slightly panicked about the new Star Wars movie—and I’m nervous that it feels like Disney has ruined it before it’s even begun. Maybe it’s me, but there’s just something about R2-D2 Mac n Cheese and Darth Vader mascara that feels just a bit like overkill.

Which is why I was more than a bit skeptical about another Rocky movie. I’d had just about enough of my precious cinema memories vandalized for one year, thank you. I wasn’t about to hand over more cash to the Hollywood pop culture re-hash machine for the sake of selling nostalgia.

But then I noticed something very interesting in the small print: Ryan Coogler. If you don’t know who this 29-year old writer/director is, then you will very soon. His 2013 debut film, Fruitvale Station, was a critically-acclaimed independent film that won high praise from pundits and won many Best First Film awards from such prestigious organizations as the National Board of Review, New York Film Critics Circle, Independent Spirit Awards, and Chicago Film Critics Association. Many were expecting great things from Coogler with his sophomore effort, but who knew he would follow up a small, politically-charged, independent, based-on-a-true story intimate drama with the 7th in one of the most popular and most successful American sports film franchises. But turning over the reins of the iconic character and story of Rocky to visionary young director Coogler is exactly what this franchise needed to breathe fresh life into a tired and worn out warhorse—and, as it turns out, just the right bit of modern movie-making magic to even make me believe in nostalgia again.

Yes….Rocky. Long before it and Sly Stallone became a joke for being the first to suffer sequel-itis (now there are too many with the disease to count), let’s not forget that there was an original that was good. Really good. So good in fact that it won the Oscar for Best Picture in 1977, famously beating out All the President’s Men, Network and Taxi Driver. (Even reading that again now makes me gasp, but it’s true.) Whether it’s deserving or not has been debated for over thirty years, but the fact remains that the original Rocky was and continues to be one of the all-time classic American films.

Rocky’s formula for success—humble, lower-class underdog who overcomes the odds through grit, determination and love—was copied several times, to varying levels of success in many sequels (5 to be exact), but none could ever come close to the original’s naturalism, charm and innocence. Instead, the Rocky franchise would turn into the epitome of assembly-line Hollywood and a symbol of all that was wrong with the studio paradigm.

Which is why we must give Coogler and MGM extra credit here. It would be way too easy to call Creed a reboot of the Rocky franchise. It is not that at all. While Creed is, yes, another in a long line of Rocky movies, because it continues the story of Rocky Balboa, it is adamantly NOT a sequel, nor even a new Rocky movie at all. It is, instead, a film that happens to have all the spirit, energy, nostalgia—and, yes, some of the formula—of the original Rocky, but it also has all the spirit, energy and self-assurance of its own. Adonis Creed is his own man. And Creed is its own movie. And both are worth stepping into the ring with.

In Creed, Michael B. Jordan plays Adonis Johnson, also known as Adonis Creed, because he is the son of Rocky’s late friend and former heavyweight champion Apollo Creed. Adonis has inherited his father’s boxing skills and wants to become a champ like his father, so he seeks out Apollo’s old friend, Rocky, to mentor and train him. Rocky is reluctant and Adonis is headstrong, but some things are just meant to be and the two end up working together and, from there, Creed becomes a boxing movie, but one so exciting and well-done, even people who hate boxing just may enjoy it.

But, really, where Creed gets its texture is from all the moments outside the ring—the nuance and detail which Coogler brings to the party. The throwbacks to Rocky are everywhere, cleverly done, enough to make all the fans of the original film tear up, but not so many to make the kids groan. There is just the right combination of freshness and nostalgia here, with clever takes on classic moments that give you both a rush and a sigh. Creed is so good, it even finds a way to get a true (and delightful) performance out of Sylvester Stallone, who hasn’t had to really act since 1977. Tessa Thompson, who plays Adonis’ girlfriend Bianca, holds the screen and scenes she’s in fully—a nicely drawn female character in a male-dominated boxing movie.

The only disappointment here is Michael B. Jordan himself. As an actor, I just don’t see the depth and acting chops to carry a role like this. Physically, he pulls it off, but there is none of Stallone’s endearing humility which he brought to the original role that inspired it, or even any of the personality that Carl Weathers, who played Apollo in the original films, had on screen. Jordan comes off as a cocky, arrogant kid—the wrong mix to win over a Rocky audience. While I accept that there needed to be a clear difference in character between Rocky and Adonis, a crucial part of any sports movie is walking that thin line between bravado and rootability. I never found myself rooting for Creed because, well, I didn’t like him. Not a good thing in a boxing movie.

So it goes a long way when I say I still really enjoyed this movie. The boxing scenes are phenomenal, particularly a match early in the movie that Coogler shoots in one, uncut shot, the mastery of which I still cannot wrap my head around. Again, Creed does eventually turn into a typical if above-average sports movie, but, if you have any love whatsoever for the original Rocky or any nostalgia for a franchise that celebrates good old-fashioned American determination, then go see Creed, a movie by an up-and-coming filmmaker who manages to bring all the freshness to something that could easily have been stale and worn out. Maybe a little nostalgia isn’t so bad after all.