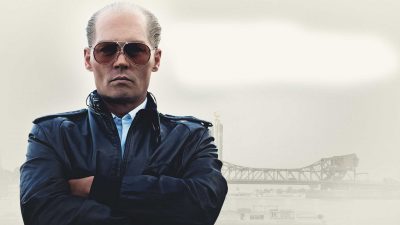 You don’t truly appreciate something until it’s gone. Or until you’ve sat through a really bad rip-off of it.

It’s not that I didn’t value Martin Scorsese movies before. But now that I’ve seen someone totally try to copy them, I see that maybe he is kind of a genius and that it’s a little harder than it looks to make movies that good. Or maybe Black Mass was just that bad. Either way, so much for Johnny Depp’s career revitalization. Where’s Tim Burton when you need him.

Black Mass could’ve been so much better. It’s based on the true story of mobster James “Whitey” Bulger, the small-time hood-turned-crime-boss, who—with the FBI’s assistance, apparently—ruled South Boston with an iron (and bloody) fist during the mid-1980s. The FBI ostensibly used Bulger as an informant to gather intel on a rival crime family, but, as it turned out, Bulger had the upper hand, and played both sides of the law to suit his needs, leveraging his relationship with the FBI agent in charge, a childhood buddy from the neighborhood. Did we mention that Bulger also had a brother who happened to be the most powerful state senator in Massachusetts? A tangled web, indeed. Too bad a better script and film couldn’t come to fruition from this sordid true life tale that seemed tailor-made for the screen (Gangsters! Crooked cops! Possibly crooked politicians! Drugs and murder! A famous outlaw who got away! Ripped from the headlines true story! It’s all here!) But no, we get this, a movie that plays like someone was looking at a list of scenes they wanted to shoot—a rundown of the key moments and incidents that needs to be played out—and then they were shot with no imagination and then cut together with even less emotional weight. The only emotional consistency at all comes from Johnny Depp’s performance, as he plays Bulger with a steely passion and curious energy—it was the only thing that kept me from walking out.

There is nothing remotely imaginative, inventive or original about Black Mass, however. Director Scott Cooper, who’s first movie, Crazy Heart, was an intimate character piece, chose to go much bigger here and lost character and intimacy completely. This movie suffers from some sort of desire to be something else—it feels like it’s copying everything from Scorsese’s The Departed to, well, Scorsese’s Goodfellas (and every other mob movie and TV show ever made, for that matter). In the end, it’s just one big mob movie cliché—everything is telegraphed, been-there-done-that. And this story should have been riveting, fascinating, even fun to watch. But screenwriters Mark Mallouk and Jez Butterworth instead give us a ham-fisted, dull, uninteresting, cliché-laden Mobster Movie-of –the-Week, complete with cringe-worthy token female performances that are worse than insulting, they are downright offensive.

But, let’s be honest, we all came to see Johnny Depp. Without him in this movie, it just might be a movie of the week (even though this subject deserves to be more and deserves better treatment in a better movie), so let’s address the fake nose in the room. How is Depp’s performance as Whitey Bulger? Is this the career comeback he so needs and deserves? Well, yes and no. This movie is terrible, so that won’t help. But the bad things about the movie, honestly, aren’t totally Depp’s fault. He checks Jack Sparrow at the door and doesn’t overact too much or chew too much scenery (although you can tell the director really wanted him to), which is greatly appreciated, and it certainly isn’t his fault that there is absolutely no way to NOT be completely distracted every second he is on screen by the fake blue contact lenses he wears (if it’s so important that the character have blue eyes, then hire an actor with blue eyes!! It couldn’t have made the movie any worse….those dead eyes are a big part of what kills the movie…seriously. Who approved those? Did they think we wouldn’t notice?) and he really does make the most of what he can, being buried under all the prosthetics and makeup. But, unfortunately, no matter how valiantly he tries, he just can’t save this movie. And, sadly for him—and his career—he is intrinsically linked to every second of this gnarly mess. As is the horrible Joel Edgerton, who plays FBI Agent John Connolly. Edgerton is so bad, there were moments when I longed for the dead-eyed stare of Depp’s fake contacts to come back on screen. And then there were the moments when I wondered what the heck Benedict Cumberbatch, who plays Billy Bulger, Whitey’s brother, was doing there. Benedict Cumberbatch, really? I know he’s good, but this was some of the worst casting I’ve ever seen.

Everything about this movie felt wrong. For a movie with such a powerful story to tell, it fell far short of effectively telling it. The cinematography was unimaginative, the dialogue was trite, the heavy-handed score was way over-the-top, and every scene just felt like it was there just to get to the next one. If you want to see a Scorsese mob movie, take the time to actually see a Scorsese mob movie, not a cheap, lazy and unimaginative copy of one. The master deserves better. And, frankly, so does Johnny Depp.