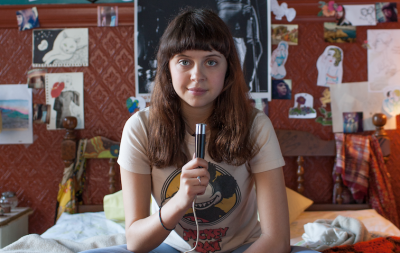 I wish I could tell you more about the new indie movie Diary of a Teenage Girl, but, to be honest, my eyes glazed over about 2/3 of the way through, so I am not a good one to analyze the depth and meaning of the piece. You’ll need to talk to someone who is a little more tolerant of movies as impressed with themselves as this one obviously is, someone who enjoys self-indulgent, in-your-face, stream-of-consciousness, rambling navel gazing as much as this one is. Me? I prefer movies that offer up things like plot, story, character development and some sort of entertainment value.

If you hadn’t guessed by now, I’m not a big fan of Diary of a Teenage Girl.

It’s too bad, too, because I am always rooting for movie debuts of female writer/directors to be successes. Diary of a Teenage Girl is the debut film for writer/director Marielle Heller, and it’s based on the book by Phoebe Gloeckner. Starring newcomer Bel Powley, Kristen Wiig and Alexander Skarsgard, it tells the story of a teenage girl in San Francisco in the 70’s and her various sexual escapades. Whether it’s a coming-of-age tale, a sexual-awakening story, or a graphic novel come to life, whatever it is intended to be, it ends up a complete mess, as I ended up caring as much about Skarsgard’s sideburns as I did the main character’s emotional well-being. Diary of a Teenage Girl should be lauded for its bravado and its attempts at honesty and realistic depiction of the emotional life of a teenage girl, but this is the kind of story best left in the pages of a book, where inner dialogue can run with the color and lack of focus that imagination and emotion thrive on. The movie lost me when I realized we weren’t going on any real journey, we were just going to go round and round. For me, that’s not deep—it’s just boring.