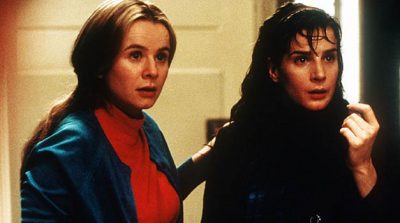 Also out on video this month is Hilary and Jackie, a small picture from October Films starring 1998 Academy Award nominees Emily Watson and Rachel Griffiths.

Hilary and Jackie marks the motion picture directorial debut of Anand Tucker. Tucker, best known as a documentary filmmaker, takes a good stab at the true story of Jacqueline and Hilary Du Pre, the famous musical sisters who grew up in England in the 1950’s. But, as with most true stories, there really isn’t anything more here than a character study, which explains the attraction for two truly gifted actresses of Watson’s and Griffith’s stature, but really doesn’t leave much else for the audience.

Hilary and Jackie is more of a tale than a story. It tells the tale of two sisters, one who becomes famous and one who doesn’t. Sort of like Beaches, only set in England. While both Emily Watson and Rachel Griffiths were nominated for Oscars for their roles in this film, it is Watson’s role, as the tragic true-life cello prodigy Jackie Du Pre, that has all the meat. Griffiths is almost wasted, and anyone who remembers her from the brilliant Muriel’s Wedding will be only saddened to see her take a back seat here.

But Watson is up to the task, playing both pathetic and bitchy with extraordinary bravado. It is obvious that Tucker is relying on his actors to deliver him a film, since there really isn’t much else in the script. Other subplots come and go without destination, offering simply teases of alternate storylines. But the film is, through and through, about that unique, hard-to-define, and utterly powerful connection that exists between sisters. While it does do well to capture at least a hint of that unspoken bond, I still feel Hilary and Jackie disappoints in the smaller realms of storytelling that would have made this as extraordinary a film as the performances of its lead actresses.

My rating: ** Beware: chick flick, but still worth the rental