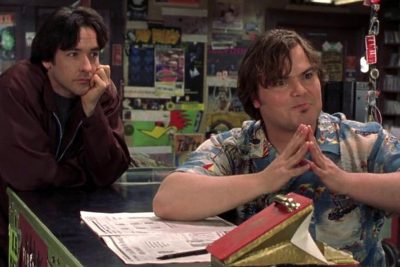 High Fidelity is not a John Hughes movie. But it definitely feels like one. John Cusack plays Rob Gordon, the quintessential thirty-year-old who never left high school. Unsuccessful in life and in love, Rob spends his time ruminating about the source of his unhappiness, whether it be the various heartbreaks he’s endured or the lack of direction in his life. The film itself is not about finding the answer but about the journey we take into the life of this pathetic yet strangely sympathetic character.

For a John Cusack movie billed as a hilarious comedy, High Fidelity is surprisingly and disappointingly unfunny. The insertion of stock characters intended to encourage the cheap easy laugh is an insult to the vast talent of Cusack, who masters the art of the subtle and sublime comedy. No matter how charming and talented John Cusack is though, even he cannot overcome material that, to be honest, is just plain uninteresting.

I cannot help but revert back to the John Hughes movie reference. What made those films successful were their charming and successful casting choices and their subject matter and dialogue that were easily identifiable and relatable to the ‘80s teenage audience. The Hughes films of the early-to-mid 80s gave teenagers stories and characters they could relate to because they were the characters: losers, dreamers, drifters and misunderstoods. High Fidelity assumes to be speaking for all us thirty-somethings, the John Hughes teenagers (of which I am one) who are now grown up and facing the various vagaries of life in the real world, far from the dysfunctional nest of high school. But it somehow misses the mark, proving to be uninteresting and surprisingly boring. For instance, I found it difficult to feel sorry for this guy who complains about all the beautiful women he’s bedded through the years.

How does High Fidelity miss the mark? The potential certainly was there. Based on Nick Hornby’s novel of the same name and adapted by John Cusack, D.V. DeVincentis, Steve Pink and Scott Michael Rosenberg, I almost feel as if the film would’ve been funnier if written from scratch. But I think the majority of the cause needs to be seen in the choice of director. Stephen Frears directed High Fidelity. Stephen Frears?? Maybe it’s me, but I don’t really remember Mary Reilly, Hero,The Grifters or Dangerous Liaisons being laugh riots. Why this choice of director? (I must make a note here that I have not seen My Beautiful Laundrette, also directed by Frears, which, I’m told is a very funny film.)

This movie should have been funnier. On page, this movie probably was funnier. The laughs that come are cheap and uninventive. Most of them come from Jack Black, an actor who apparently has a cult following stemming from the fact that he is the lead singer of an underground rock group called Tenacious D. Black channels John Belushi as he plays the sarcastic, cynical, overweight colleague of Rob’s, whose only talents in life are the apparently genius knowledge of the history of pop music and the uncanny ability to insult people in a heartbeat. Black attempts to steal the screen every time he’s near it, and it gets old after a while. While I can appreciate that his character is the embodiment of the “losers” who do work in record stores and wear concert t-shirts when they’re in their thirties, I grew tired of the schtick.

While John Cusack is in every frame of this film, I still feel he was wasted. Cusack is a monster talent and coming off of one of his most critically acclaimed roles of his career in Being John Malkovich. With High Fidelity, he returns to the territory in which he started, as the charming loser that we fell in love with in the eighties in Better Off Dead and Say Anything. Unfortunately, the material here isn’t nearly as strong as those classics.

High Fidelity has its moments, most definitely. Most of them come from the brilliant soundtrack, but the others come from Cusask and his momentary flashes of genius. But, for the most part, High Fidelity comes up short.

Check out the official High Fidelity website. It is one of the best movie sites I’ve visited.