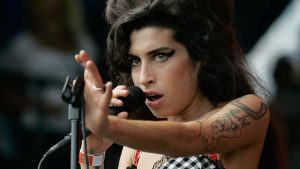 These days, it seems all of our lives are lived on some sort of media, whether it’s Facebook, Twitter, Instagram or good old-fashioned photos and video. When it comes to the lives of celebrities, you can add the mountain of unwelcome paparazzi footage and photos to any personal photos and videos there may be and you wonder how anyone has any privacy at all anymore. Which is why it’s not surprising to have not one but two incredibly revealing documentaries just this year about two of our most famous musicians who died young (both at age 27) be made up nearly entirely of found footage, a combination of personal and public videos and photographs. It not only creates a uniquely intimate portrait of the person, but a revealing picture of our times.

A couple of months ago, I saw the disturbing but fascinating Brett Morgen documentary Kurt Cobain: Montage of Heck and last night I saw Asif Kapadia’s Amy, a revealing if slanted documentary of the life of British jazz/pop singer Amy Winehouse. Both Kurt Cobain and Amy Winehouse were musicians with incredible talents who skyrocketed to fame, were reluctant celebrities and seemed to escape their sudden fame by diving into addiction. Both died way too young at age 27, Cobain of a self-inflicted gunshot wound and Winehouse from alcohol abuse and bulimia. While Kurt Cobain: Montage of Heck was a much more fantastical documentary than usual, animating Cobain’s diaries and drawings to speculate his state of mind, Amy is a much more straightforward film, using stock footage and photographs, combined with voiceover narration from those in her inner circle, to tell the all-too-short life story of a troubled artist whose music the world fell in love with.

The main problem with Amy, however, is we, the audience, become all too aware all too soon of director Kapadia’s intentions with the film. Yes, of course, when a talented artist dies at the unfathomably young age of 27, especially when they seem to have everything—fame, fortune, the respect of their industry—the natural desire is to ask why. And the natural tendency for a documentarian, I would imagine, would be to serve up answers, but I would never have imagined them to be delivered in such an unimaginative and blunt a way as Kapadia does here. From the very start, Winehouse is presented as a massive talent who is surrounded by people who not only have no idea how to handle the size of her skill, but the enormity of her neediness and depth of her vulnerabilities. She is painted with the brush of a person with severe “daddy issues” from early on, and this tracks throughout her life, as Kapadia serves up her father as an easy villain, along with her manipulative and seemingly heartless husband Blake Fielder, who got her hooked on crack cocaine.

While it’s always difficult to make any “here’s the real story” film of a famous person because there is probably always someone who has an agenda one way or another, it was ultimately disappointing to feel the obvious ways the winds were blowing in this movie. I hated seeing Amy Winehouse portrayed as a weak, vulnerable addict who was nothing more than a petulant teenager. Even if that is a true portrait, there was nothing in this film to counter-balance that view, except for key moments: when she was performing. The genius artistry that came out of this tortured soul, this was what I came for and this is what I wanted to learn about. Kapadia does a great job of putting the lyrics up on the screen as we hear and see Winehouse singing some of her brilliant signature songs, but I wish we could have learned much more about the origins and process of creating these songs. Instead, we spend only ten minutes in the studio (watching the song “Back to Black” being recorded, which is the best moment of the film), not enough time at all to get a sense of who this monumental artist was, aside from an alcoholic, man-obsessed, broken child. There’s just too much here that feels easy, disrespectful and lazy.

The fact that Kapadia chooses to get the majority of his narration and “story” from Amy’s friends and family, those who were witness to her emotional implosion, and only gets brief, one-sentence contributions from professional colleagues like collaborators or producers demonstrates his agenda perfectly. Amy was made like a tabloid and plays like one.

In the end, while it may seem clever to make a movie made up of only found footage, it turns out to be simply a short-cut to a true documentary. Without any effort put into getting to know what we haven’t already seen and heard of Amy Winehouse, she will continue to be the tortured, lost soul that we thought we knew already. And now, sadly, we still won’t know any differently.