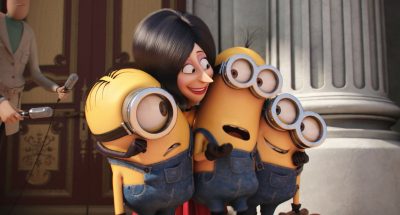 What can you really say about Minions? Anyone who saw the animated hit Despicable Me or its far lesser sequel, Despicable Me 2, knew that these little yellow, nonsensical pill-shaped charmers were the stars of the show and that Universal would find a way to give them a money-maker—I mean movie—of their own. The Minions are a marketers dream come true—instantly recognizable, appealing to all ages (especially children, the most passionate of consumers), and, because they literally speak a made-up language, the movie can play in any country using the original voiceover artists, which, I imagine, will help it considerably overseas. In this day and age, when box office numbers are relying more and more on foreign numbers for their profit margins, that is huge.

So, obviously, from a business standpoint, Minions was a no-brainer. From an audience standpoint, it seemed like a no-brainer as well. I mean, I had the choice last night to see Minions or Amy, the highly-touted and well-reviewed documentary about the life of the late singer Amy Winehouse, and I went with the adventures of the mindless little yellow creatures. I of course will see Amy soon, but, last night, I was in the mood to giggle and be amused because, I will admit, I find those silly little animated runts totally adorable.

I mean, there’s absolutely nothing rational about the Minions or about this movie. It’s a prequel to Despicable Me and tells the story of how the Minions came to be in the employ of the villain Gru, who they work for in that original film. Minions tells the backstory—the life cycle, if you will—of the entire species of Minion, and their endless pursuit of a boss, the perfect villain for whom they can offer their services. The best part of the film, the beginning, shows us all the failed attempts the Minions made over the eons to connect with a proper villain employer. The movie continues over the eras and lands in 1968 New York City, where they learn of the ultimate villain who they are determined to serve, Scarlet Overkill (voiced by Sandra Bullock), and set out to find her at Villain Con in Orlando (love the coincidence here to the currently-running ComicCon).

So, ignoring all the obvious questions that I had—do Minions ever die? How do they procreate? What do they eat? How do they survive thousands of years? How do they understand foreign languages but can’t speak them? How do they know how to operate a television? How do they carry a backpack if they don’t have shoulders?—I learned that I just had to go with it and, of course, the essence to every movie like this, have fun with it. And that, of course, is THE essence of the Minions and Minions as a whole: it (and they) make no sense (although, strangely enough, you do find yourself starting to understand their language after a while, which is, a language after all), and the whole thing is just a wild and crazy adorable adventure, featuring these crazy little characters who make you smile. It’s a Saturday morning cartoon, just bigger and longer.

The worst part of this movie was the villain character, usually such a reliable source of pleasure in most movies like this. Here, Scarlet Overkill was one note and very badly written. Bullock did her best, but the character and plot line was boring and predictable—and actually quite insulting to women. But Jon Hamm created a fun character voicing her goofy husband and all the other peripheral characters were fun as well. But, obviously, the reason to stay are the Minions themselves, especially the three featured Minions, Kevin, Stuart and Bob, the Three Stooges of animation. The best parts of the movie are when these three, and their throng of compatriots, are on screen doing cute/silly/absurd things, especially to each other—and they do a lot of them. They have an innocence, whimsy, curiosity and determination that is endearing and a certain lack of intelligence and coordination that is hilarious. The filmmakers manage to walk the fine line of mocking them without insulting them or ever making them look dumb, which really is harder than it sounds. We root for them every step of the way, even while we are laughing at them. They are totally charming, adorable and clever little creations.

Of course, I can’t help but think they could have made a better film—certainly one that featured a better antagonist for our little heroes—but, all in all, Minions gave me what I was looking for and exactly what I was expecting. Truly a perfect mid-summer trifle.

[Note: I saw it in 3D and enjoyed it. Also, if you go, stay until the end of the credits.]