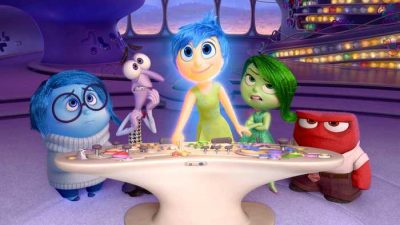 Pixar movies have always been about unique points of view. Whether it’s toys (Toy Story and its sequels), monsters who live under the bed (Monsters, Inc.), a lost clownfish (Finding Nemo), an ant (A Bug’s Life), a solitary robot in the future (WALL-E), or so many others, the animation studio’s unique gift is to present stories from unusual point of views in such endearing, charming, funny and touching ways that we end up relating and caring about these characters as if they are a part of us, or even as if they are us. The artists at Pixar’s real talent is understanding the universality of human compassion and emotion, and it doesn’t matter what form or setting of the story, as long as it speaks to the heart.

Which is why only Pixar could have made Inside Out. It is such a thoroughly imaginative and high-concept, yet accessible and heart-warming film, it truly belongs in the Pixar catalog, although I wouldn’t go so far as to say it’s one of my favorites from the studio. While it truly is the smartest and has the best concept of all Pixar’s movies, it has the weakest story, so, if you like high concept and are satisfied to spend an hour and a half being dazzled with ideas and truly magnificent follow-through of high-concept, philosophical jokes that you wonder how kids will ever get, Inside Out is a real wonder to behold. But I was left wishing there could have been a better plot from start to finish to bolster the superb foundation.

Speaking of foundation, let me explain. Inside Out is about our emotions. Sounds esoteric, doesn’t it? Well, the movie is quite esoteric, quite deep on a lot of levels, and really brilliant in a lot of ways. The main characters in the movie are Joy, Sadness, Anger, Fear and Disgust, all voiced brilliantly, particularly Amy Poehler (Joy), Bill Hader (Fear) and especially Phyllis Smith (Sadness), who steals the movie—intentionally or not? These characters/emotions all live inside an 11-year old girl named Riley, who is happily living in Minnesota, until she moves with her parents to San Francisco. Life in the new place is hard for Riley, and it’s a tough adjustment for her emotions as well, trying to find a balance because it’s their job to keep Riley happy.

When things go south, Joy and Sadness end up away from “headquarters” and get lost and have to get back to salvage Riley’s core memories—and emotional stability. There are some very clever things that happen along the way, but I got bored with the nuances of the actual logistics of the journey. Fortunately, there were enough really brilliant sequences to make it all worthwhile. This is a really smart movie.

But at the heart of everything here—and in life—is the push-pull relationship between Joy and Sadness. It’s a magnificently wise observation by the filmmakers—and so well executed— here to set up these characters the way they do and have it play out the way they do and have it end up the way they do. All of us feel a daily battle between these emotions in some way and one of them wins in every moment, in some combination, in one way or another. And [SPOILER ALERT] the way Sadness is embraced in the end as a critical and crucial part of our human experience—I can’t imagine a better message for kids and adults alike. What other studio could deliver a moment like this.

There is so much in Inside Out that is clever and insightful and so much that I’m sure I missed that I would catch upon a second viewing, I’m sure. I laughed out loud several times and yes, I did get a big lump in my throat—curse you, Pixar—and Inside Out is amazingly well done, beautiful to look at and well worth your time. It certainly isn’t my favorite Pixar movie, but there is so much there to recommend it, to all ages, to all points of view.