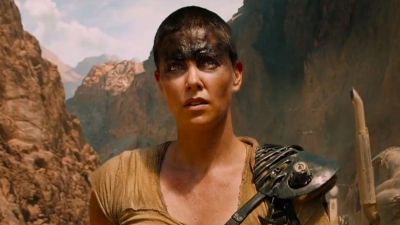 Summer Movie Season is usually a double-edged sword. I never know whether to be excited about the slickly-produced (read: expensive) escapist fare meant to entertain us or begrudge the assembly-line brainless noise designed to extract the largest sums from our wallets in the shortest amounts of time. Half of it is insulting to our intelligence (ok, more than half), but the studios actually save their biggest bottom-line salvos for the summer, which means that sometimes we, the audience, get the biggest bang for our buck and, once in a while, summer will deliver an experience or two in the movie theatre unlike anything or anywhere else—and that’s what keeps us coming back. Thanks a lot, Jaws.

Of course, last night, during the previews for the feature presentation of Mad Max: Fury Road, the first big summer movie of the year that I am seeing (I skipped Avengers: Age of Ultron—see first paragraph’s “brainless noise” assumption), I was disappointingly reminded of what summer movies have become these days. Two previews in particular were examples of the dumbing-and-numbing-down of the current action movie genre: Ant-Man and San Andreas. Well, whaddya know…a superhero movie and a disaster movie. How original. At the end of the San Andreas trailer, the audience I was in was actually laughing. Not a good reaction for a disaster movie about a giant earthquake that destroys Los Angeles. Maybe it hits too close to home. Or maybe—we’ve just had enough.

Which is why Mad Max: Fury Road is just the post-apocalyptic nightmare action movie to kick Hollywood and audiences out of their superhero/disaster movie coma and remind us that summer can be about spectacle, action, escapism, fantasy, special effects, fun AND creativity and originality. It’s been a long time since we could say that.

The last entry in the Mad Max movie franchise was Mad Max Beyond Thunderdome, THIRTY years ago. Before that, there was the original, Mad Max (1979) and the sequel, Mad Max: The Road Warrior (1981). All three were written and directed by George Miller. Since then, Miller has only made a handful of movies, including The Witches of Eastwick (1987), Lorenzo’s Oil (1992) and both Happy Feet (2006) and its sequel, Happy Feet Two (2011). I mention this because Miller is 70 years old and doesn’t have much of a resume in Hollywood. He doesn’t work too often and is clearly known for the Mad Max franchise, the last entry of which was thirty years ago. In Hollywood terms, this makes the guy beyond a dinosaur. This makes him an oozing puddle of oil in the LaBrea tarpits. In Hollywood, it’s not what have you done for me lately, it’s what have you earned for me lately.

Which makes all of this even more incredible.

In this day and age of reboots (Star Wars, Star Trek, Batman, Superman, I could go on and on), everything old is made new again because, well, nobody has any new ideas, Hollywood just trots out the old ideas and makes them “fresh” with some new upstart kid at the helm, markets it to the new generation and it sends it out anew. So, when they wanted to revive Mad Max, dormant for 30 years, Hollywood studio Warner Bros could easily have chosen one of two popular options: hire a flashy, young director/writer to reboot it altogether, or, if they just wanted to add another tale to the franchise, hire a flashy, young director/writer to direct/write the newest entry in the saga. Instead, however, they went back to Miller himself, the creator of the legacy. Did I mention that Miller’s last foray into action cinema was literally the last Mad Max movie—in 1985? Do you understand what a giant risk and leap of faith that is for a major Hollywood studio, especially when you see, clearly, how much money they spent. I mean, the guy’s last two movies were about cartoon penguins. But the studio must have had faith that Miller, most famous and still thriving on his near cult-like status for having created the Mad Max universe in the first place, still had the ability to take the audience back into that world and find a way to bring it back to the screen in a way that can be relevant, fresh and exciting to an audience of 2015.

Warner Bros’ faith has been rewarded.

Mad Max: Fury Road is a furiously wild ride of nightmarish proportions, a non-stop, high-energy bullet-train into a tunnel of darkness. It whips you around, makes you dizzy, then catapults you back up into the air. George Miller needed to be at the helm of this movie because he clearly lives, breathes and dreams this world. I have never seen any of the previous Mad Max movies, but it is clear that the director is at home here. And knowing this world is essential, because this world—-a post-apocalyptic wasteland where humans are struggling to survive in violent tribes—is a dark, violent, complex and ethically-challenged one. It’s also a visually stunning one, all sand and rock where fire is fuel and water is life. The stunning cinematography, by Oscar winner John Seale (who won for The English Patient, so he knows how to shoot sand), is breathtaking, but it is truly the non-stop action and the world of Mad Max: Fury Road that makes this movie the experience that it is. It is a showcase of stunts that would make Cirque du Soleil performers gasp—and none of them CGI. The mass of humanity and steel moving across an ocean of sand in a chaotically-choreographed ballet is a mindblowing sight to behold, and that’s not even mentioning all the details that make this film so original, from makeup to costumes to extras casting to the raucous soundtrack. It is all a delirious fever dream that will make you feel like you have sand in your teeth—and glorious, heady whiplash.

As for the story, the movie itself is basically one long car chase across sand, but that belittles it in so many ways. It is a movie about survival, hope, humanity, strength and, yes, even in all this, compassion. There is very little dialogue and what dialogue there is is never wasted with exposition. The audience is never insulted that way. The story is revealed along the way and it works. And, of course, with a movie so reliant on visuals, there needs to be strong actors for the audience to connect with, and Mad Max: Fury Road does not disappoint there. Tom Hardy plays the title character (the role originated by Mel Gibson) and he is every bit the action movie hero, even if he is short on communication skills, but the star of the movie is clearly Charlize Theron, who steals the movie as the badass Furiosa, which makes this a high-octane summer action movie with a woman at the center—with no reliance on a man and no interest in romance. Yes, that is rare and that is awesome.

Mad Max: Fury Road does begin to repeat itself, action-sequence-wise, a little towards the end and it could have been about 10 minutes shorter, but those are really small quibbles about a movie that blew me away with its creativity, spectacle and full-throttle action. Theron and Hardy are terrific, and there is an absolutely wonderful supporting performance from Nicolas Hoult that shouldn’t be overlooked by anyone. But, truly, the star of this movie is George Miller, rising from the tarpits of Hollywood to prove that it’s not just the young guns that can deliver something that’s fresh, exciting, original and totally relevant. The rest of summer has a lot to live up to now.