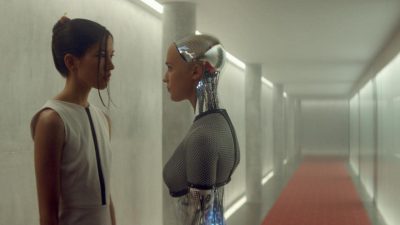 It certainly is nothing new in Hollywood movies, especially science fiction, to anticipate and/or fictionalize a future world without humans. The question of how we get there and what that future would look like—and, more specifically, what the human replacement beings would look like—has filled many a movie, since movies began to capture our imagination.

The latest movie about artificial intelligence, or AI, from writer-director Alex Garland, is called Ex Machina, and it treads much of the same philosophical ground as we’ve seen before, but in a more specific, concise, personal and haunting way.

The premise starts out like a classic horror movie set-up: a computer programmer at the world’s largest internet search engine wins a contest to spend a week with the company’s CEO, a genius recluse who lives alone in a mountain estate in the middle of nowhere, where he does mysterious research. After the programmer, Caleb (Domhnall Gleeson), is dropped off by helicopter in the middle of a field, with instructions to “follow the river,” you get the feeling something is odd, but then he comes across this gorgeous house and finally meets CEO Nathan (Oscar Isaac), who explains the need for the security is due to the ultra-sensitive research he’s been doing for the past few years. Nathan explains that he has brought Caleb there because he is on the verge of something monumental and he believes Caleb is the perfect person to bring in to test the viability of his project. The project? A fully interactive AI named Ava, who is able to react, respond and even emote. Nathan claims this is the most advanced AI ever created and could change the world and he needs Caleb to help test his hypothesis.

And that’s Ex Machina. This movie may feel “been there, done that” because so many movies have treaded this worn path before, but here’s the thing: this is the future. And movies are still being made about it because it is still ahead of us. So watching this movie play out, listening to these two men discuss the philosophy of what AI can be, seeing all that AI can bring to what we know of our world, this is what makes Ex Machina so entertaining and so significant. Don’t say it can’t happen because it can.

What really helps here is the fact that Ex Machina is anchored by two solid acting performances by two already respected actors, Oscar Isaac and Domhnall Gleeson. Several months before they both rocket to international fame in Star Wars Episode VII: The Force Awakens in December, enjoy them both here in this small, independent film where they both deliver tour de force performances that convey character and a sense of urgency and desperation at the same time. Both are brilliant, as they always are, and I urge you to seek them out before they become movie stars.

But the “star” of this movie could just be the subtle but quite staggering visual effects. They will go quite unnoticed this weekend of The Avengers: Age of Ultron opening, but they are spectacular nonetheless. The special effects process that turns actress Alicia Vikander into Ava is eye-popping and seamless. Vikander is a star in the making herself and plays Ava with the perfect amount of questionable innocence.

Writer Garland, who also wrote 28 Days Later and Sunshine, is making his directorial debut here. He does a fine job, although there’s a big part of me that wished the stereotype of the lonely recluse making the robot a hot woman could have been toned down. The overt sexuality bordered a bit too much on misogyny for my taste, but I had to try to keep it in context. Even so, it continued to bother me, which is why I cannot recommend this movie fully.

However, if you are into classic science fiction concepts, enjoy the thriller genre, and don’t mind your robots looking like they stepped out of a Robert Palmer video, Ex Machina is the perfect movie for you. Just don’t get your hopes up for anything too original or too groundbreaking. But do expect the first worthwhile movie of the year.