Harry Lives Up To The Hype
Originally reviewed November, 2001 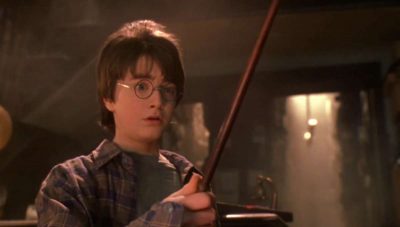 You can say what you want about kids today with their video games and their computers and their MTV attention spans, but there are some things that never change. Kids still become attached to books. Especially books that speak to them or are about them. And this fall, Hollywood is rolling out not one but two big-budget blockbusters based on popular kids’ books, hoping to cash in on that intimate love affair between children and their fictional counterparts.

And cash in they will. The first one to hit theatres, Harry Potter and the Sorcerer’s Stone (the second being the film version of J.R.R. Tolkien’s The Lord of the Rings), has already broken the box office record for most money taken in on its opening weekend and is on pace to set many more records, likely among them Titanic’s record for biggest money-maker of all time. How, you ask? How can a kids’ movie attract such an audience? Because the movie, like the book, transcends generations and reaches across all boundaries of ethnicity, religion and gender. Scoff if you must, but Harry Potter and the Sorcerer’s Stone, the book, is enthralling, fun and witty. And so is the film.

For those of you who live in a cave, Harry Potter and the Sorcerer’s Stone is about an 11-year-old English boy whose parents are killed in a car crash when he is an infant. He is sent to live with his cold-hearted aunt and uncle and their spoiled brat of a son. But Harry is about to learn a secret about himself: he is a wizard and it is time for him to go for his training at the Hogwarts School of Wizardry. While at Hogwarts, Harry finds new friends, new enemies, new adventures, new games and new enchantments that will change him forever. Written by English author J.K. Rowling, the Harry Potter series of books (there are 4 so far) is one of the biggest selling book series in children’s book history.

If you’ve read the book, there aren’t many surprises in the film. I’ve read the book, and even though there aren’t any surprises, there are still moments of glee, especially when I would recognize a particular setup and knew what was going to happen in that scene. Plainly put, I wanted to see how they would do it. And I think that’s the key to the success of the film. The book (and its three sequels, which will all be made into films eventually, for sure) has such a loyal following that most people who have read it want to see the film just to see how what is described on the page will be done on the screen.

There is much wizardry in the book, so, naturally, special effects are a must for the film. The first choice of the producers to direct the film was Steven Spielberg, a wizard himself with children and special effects. But Spielberg turned it down, declaring that the film posed no challenge for him as a director. In came Chris Columbus, a relatively lower-rent director (at least compared to Spielberg), whose major credits previously had been Home Alone and Mrs. Doubtfire.

Although most considered Columbus a second choice, I believe much of the film’s success can be attributed to Columbus’ direction. Where Spielberg probably would’ve focused on the special effects, Columbus focuses on the characters, especially the children’s characters. For most of the film, the special effects are part of the background of the film, which only adds to the mystical setting. Columbus brings the characters out front and lets the environment create the mood instead of steal the show.

And while the cast does have its share of formidable adult talent (including John Hurt, Richard Harris, and Maggie Smith), it is the child actors who steal the show, as they should. Harry, played by newcomer Daniel Radcliffe, is surrounded by his friends Ron and Hermione, played by Rupert Grint and Emma Watson, who are both wonderful to watch. Radcliffe, however, is a bit too stiff and one-dimensional and never really warms up, but he looks so much the part that it’s easy to overlook the fact that the poor kid just can’t act.

Who can act are the two best actors in the film, Robbie Coltrane as Harry’s adult friend Hagrid and Alan Rickman as the villain Snape. Coltrane and Rickman are perfectly cast and should both get Oscar nominations, they are so dead on. They won’t, of course, but that just goes to show there’s no justice in the world. That’s ok, though, because they’re already filming the second installment, so we won’t have long to wait to see them all again.