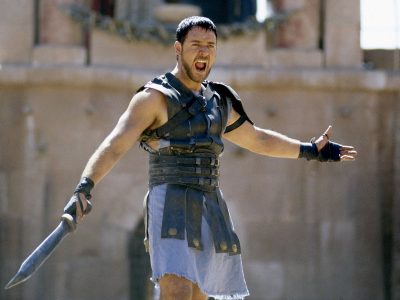 Are you ready for Summer 2000? Memorial Day weekend officially kicked off the summer movie season, and Mission: Impossible 2 destroyed all the competition, as everyone expected. There are only more fireworks to come, and far more testosterone to flow in the months to come. But before we get too distracted with the fluff and noise that we have in store for us, let’s focus on the film that got it all started and will probably be the only one left standing when all the dust settles in September.

Gladiator is the first blockbuster of the year. It got a jump on all the competition by opening in early May and it seemed to work. It opened early and had no competition, except for U571, in its genre, so people could notice it. That’s what you do when you are confident in a film. And Dreamworks and Universal have reason to have confidence in this film. It’s the first blockbuster of the season and it’s probably the best.

Despite what anybody says and whatever PR anybody rolls out, I cannot possibly imagine Russell Crowe was anybody’s first choice for this role. I have to admit even I questioned the believability of Crowe in the role of a legendary Roman hero, with the images of pudgy and sulky Jeffrey Wigand still fresh in my mind, the character he played in the Academy Award nominated The Insider, a role which won him an Oscar nomination. With his role in The Insider coming on the heels of his should-have-been-nominated performance in 1997 in L.A. Confidential, Crowe seemed certainly headed down the path of the serious actor, a la Robert DeNiro, an actor who takes his craft seriously and is destined for many nominations and many meaningful roles. Russell Crowe a Roman gladiator? Who would believe that?

Count me in, I have seen the light.

Gladiator is truly an amazing film. I will not go so far to call it an extraordinary film, but, for its genre and its purpose, it gives far more than it has to and has the audacity to treat its audience as if it had a brain. What a concept. Gladiator actually offers some culture and educational value along with its gore and muscles, a rare combo, especially at this time of year. I have a feeling that once they hired Crowe to play their hero, the filmmakers knew they had to build an intelligent film around him or else face the consequences of looking mighty foolish. No matter the reason, the film is not your run-of-the-mill dopey action adventure.

Directed by Ridley Scott, Gladiator is a polished, epic adventure of one man’s life in the Roman Empire. Much of my enjoyment of the film emanated from my lack of knowledge of the plot, so I will stop short of revealing anything here that would ruin your same enjoyment. But what does need saying is there is gore here, but nothing, I repeat, nothing that feels gratuitous or false. I found myself not even noticing the violence because it fit in so appropriately with the time, place and, most of all, story.

I credit Russell Crowe with infusing much of the elevated status of this film, but some of that influence must be awarded to the surrounding cast, most of whom are at the top of their profession. Legendary British actors Richard Harris and Derek Jacobi play key roles, and the late Oliver Reed stars also, in his final film role before his death. Their eminence adds yet another element of sincerity to this quality film.

The only weakness among the cast members lies in young American actor Joaquin Phoenix, who, by no fault of his own, just does not belong in this film with this cast. He is at least cast in the best role here possible, as the spoiled and evil Emperor, but he still prompts a chuckle or two from the audience as he just cannot hold his own in the company.

Phoenix aside, Scott delivers a magnificent tribute to his talent of fast-paced filmmaking. He has proven himself to be able to deliver films that combine action with story in the past (Thelma and Louise), so I shouldn’t have been so surprised with his success here. The visual elements are stunning, but, perhaps most amazing of all, there is a story you can follow and a character you actually care about.

This film is truly a spectacle of grand and epic proportions, worthy of your summer dollar. If you haven’t seen it yet, give Gladiator a chance. It will very likely make your summer that much more enjoyable.

My rating: *** Worth paying full price