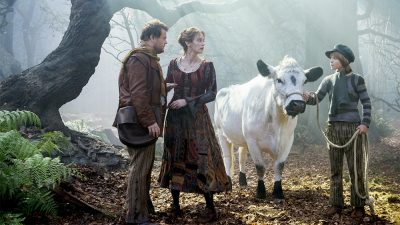 So, yes, I did see Into the Woods. And I did actually want to see it, despite what some of you might think. I love Sondheim, I love musicals, and I wanted to give this one every chance. Sadly, though, no matter how I tried, I still couldn’t find a way to love it. (And not just for the reason you think.)

Let’s just take care of this up front: I don’t like Meryl Streep. For those of you who don’t know, I think she’s overrated and certainly not worthy of the hype and pedestal she’s been placed on for the past thirty years. That said, I knew that this movie would be built around her casting as the witch, since this is a movie mash-up of classic Grimm fairy tales and her part is the central figure in the plot as well as the one that gets the most dramatic screen time. I steeled myself for it, as I’ve been able to endure Streep movies in the past—I loved Devil Wears Prada, Silkwood and Defending Your Life, for example—but I also put my faith in the fact that Stephen Sondheim’s music would be the real star here and director Rob Marshall wouldn’t let one performer pull too much focus from a brilliant ensemble in a classic ensemble piece.

I’ve always been such an optimist.

Streep pulls focus. She pulls it, she chews it, and she spits it out, same as she does with all the scenery and every line. It’s over-the-top and too much. However, this just may be the one movie where it’s appropriate, because this whole movie is too much. As a viewer, one thing you don’t get is short-changed, because Disney got every penny’s worth that it spent, from costumes to effects to sets to production value, it’s all here. Whether it all amounts to anything is another subject all together. This movie is a hurricane of possibilities that starts out with an exciting premise but disintegrates to a chaotic mess and, finally, a downright depressing final act that is heavy-handed and poorly done.

Inside it all, however, are some serious gems, including Emily Blunt’s entire performance. Every time she’s on the screen, it feels lighter, less crowded and more alive. James Corden gives the movie an interesting groundedness, Daniel Huttlestone, who was so tremendous in Les Miserables, again steals the show in his few scenes here. But my favorite scene in the entire film isn’t with any of the principles, it’s a snarky, hilarious, almost pointless song, “Agony,” sung between two princes, played with perfect self-mockery by Chris Pine and Billy Magnussen, where they both let loose with an abandon and a sense of fun that doesn’t exist in any other moment in the movie. It’s the only moment when the movie truly soars and it’s so sad when it’s over and we thud back down to earth and are forced to continue on, trudging through the forest. Agony is right.

Again, Into the Woods looks great, but it ultimately is an incredible let-down because it starts out so promising but gets harder and harder to love as it goes on. It is dark, it is depressing, and I wasn’t even able to love the music, I was so distracted by, well, everything.

And as for the giant witch in the room, let’s just say I was less than enchanted. But you can’t say I didn’t try.