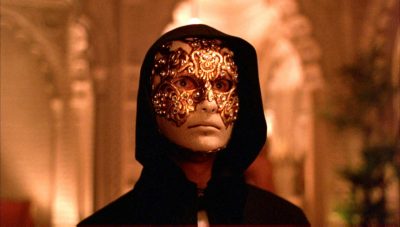 It almost feels as if the art has gone out of movies. During my lifetime, I feel that the only real consistently artistic filmmakers (in the Hollywood vein) are the Coen brothers, Joel and Ethan. Steven Spielberg has his moments, but for every The Color Purple and Empire of the Sun comes a Lost World. True film lovers have been starving for artistic vision to return to major releases, which probably explains the excitement over last year’s The Thin Red Line, which marked a film artist’s, Terrence Malick, return to movie-making after a ten-year absence. And that same starvation is what feeds the frenzy that surrounds the current release of the late legendary director Stanley Kubrick’s final film, Eyes Wide Shut. If only the product could have lived up to the anticipation.

Stanley Kubrick was an artist. He not only made movies with visual strokes, but he was a master of pacing and theme as well. His masterpieces, A Clockwork Orange, 2001: A Space Odyssey and Dr. Strangelove, will stand forever in cinematic history as works beyond compare, not only in scope, but in texture, metaphor and context. Yet, in all of his films there was a distance, a sense of the grand scope of humanity, lacking a feeling of intimacy. Eyes Wide Shut was Kubrick’s attempt at intimacy. Eyes Wide Shut looks not at humanity in its entirety but in its individuality.

But Kubrick’s same meandering, plodding pacing and style that worked so eloquently in the distanced, wide-scoped space fantasy of 2001 fails him here. The painfully slow crawl of the story fails to capture its audience and draw them in, despite the haunting elements of Kubrickesque surrealism that are still so unique.

Tom Cruise and Nicole Kidman play Bill and Alice Harford, a couple married nine years with a seven-year-old daughter. Bill is a medical doctor with his own practice which affords the family all the luxuries Manhattan can offer, from an elegant apartment to an endless flow of cash and wealthy socialite friends. It would seem life is perfect for the Harfords, but a secret fantasy revealed threatens to tear everything apart as Bill realizes the solid ground his life has been walked on could really be nothing but quicksand. He takes off into the New York City night, only to embark on a series of adventures that will change his life forever.

The essence of this film lies in the examination of temptation as a psychological weapon, not only for the tempted, but for the jealous as well. While these sorts of deep philosophical metaphors are right up Kubrick’s alley, his actors fail to carry its weight. It is sad to say that the single biggest failure of this film is its main draw: Tom Cruise. Despite all the publicity citing this as a film co-starring Cruise and his wife, Nicole Kidman, it is entirely Cruise’s film. Kidman’s character sets the movie on its way but it is Cruise’s character who lives the adventure and whose journey is the heart of the film. And the psychological struggle this man endures is far out of reach for Cruise’s limited abilities.

Not only is the power of the theme out of the star’s grasp, but the entire focus is off. Instead of focusing on how temptation threatens the couple and their relationship, Eyes Wide Shut focuses solely on Bill’s psychological journey towards understanding, which leaves Kidman virtually wasted and leaves the audience hungry for a show-down between husband and wife that only comes in the final frames. It is too long a wait for such an unsatisfactory conclusion.

It also doesn’t help matters that the film is so long (2 ½ hours) and so drawn out. With Cruise unable to raise the stakes in his acting and draw the audience into his psychological turmoil, the audience is left bored, desperately longing for resolution and conclusion. The heavy-handed score is equally numbing. The single pounding piano key employed in nearly every “tense” scene became comical after two hours.

As far as all you’ve heard about the sex scenes and the nudity, it is all here. But the nudity is anything but titillating. In fact, it is so matter-of-fact that it only serves to illustrate the depraved indifference of the people who inhabit this bizarre world Kubrick had created.

Are there any true Stanley Kubrick moments in Eyes Wide Shut? Absolutely. Are there glimpses of the genius? More than one. But does Eyes Wide Shut live up to the standards that Kubrick himself created? Sadly, no. What a way to go out.

My rating: ** Wait for video