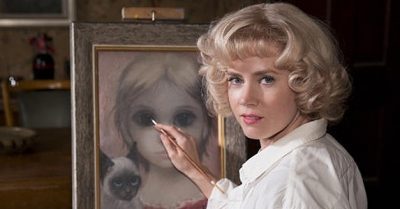 Has Tim Burton finally grown up? The director we’ve come to know and love for delivering our ghoulishly delightful, playfully nightmarish and stylistically dark storytelling for 29 years, from Beetlejuice to Edward Scissorhands to Sweeney Todd to Mars Attacks! to Corpse Bride to Sleepy Hollow, has now dared to make a—gasp!—regular movie? I don’t know what’s more unnerving—the thought of Beetlejuice winning an Oscar or Tim Burton being normal (careful, they both might happen this year).

Well, as scary as it is to say, it looks like Mr. Nightmare Before Christmas himself does actually know how to make a straight movie. And, guess what? It’s pretty good. Big Eyes, directed by Tim Burton and written by Scott Alexander and Larry Karaszewski (Ed Wood, The People vs. Larry Flynt) and starring Amy Adams and Christoph Waltz is a fascinating movie based on the true story of painter Margaret Keane and her husband Walter, who took credit for Margaret’s wildly popular paintings in the ‘50s. These paintings of children with the “big eyes” were apparently all the rage back then and became a pop art sensation, but the story of this movie is the relationship—and the internal divide—between husband and wife when Walter, played by the magnificent Waltz, steals creative ownership of the paintings publicly in order to sell them. When the lie becomes bigger than the both of them, Margaret, played with usual brilliance by Adams, is trapped, and the deceit envelops her world.

Big Eyes is a stunning story that will captivate you from start to finish, but what keeps you riveted are the two phenomenal performances at its heart. Amy Adams and Christoph Waltz are so compelling to watch and work so perfectly together, it is a rare moment in this film when either one is not absolutely bringing their A game. Adams’ quiet reserve is a perfect contrast to Waltz’ eccentric, outgoing charm, which is on full display here.

The film is not only a study of a relationship, but it’s also an examination of a society and a place and time—you can’t ask “how could this have happened?” without looking at the social politics of the time and examining the choices women had—Burton and writers Alexander and Karaszewski do a great job of making a movie that’s not political but paints a time and place just enough for there to be an understanding of history.