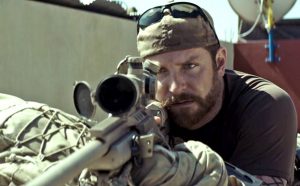 I’m trying to remember the last time Clint Eastwood made a good movie. I think it was back in 2006, with Letters from Iwo Jima, which even then was almost nullified by its companion film, Flags of Our Fathers, which was awful. How could the man who made Unforgiven in 1992, Mystic River in 2003, and Million Dollar Baby in 2004—not to mention Letter from Iwo Jima, perhaps his best of all—fall so quickly with Changeling (2008), Invictus (2009), Hereafter (2010), J. Edgar (2011), Jersey Boys (2014) and now American Sniper, a painful, one-dimensional, hackneyed and stiff reminder that Eastwood’s best days are most certainly behind him.

American Sniper is bad. Really bad. Much of the blame does fall to Eastwood, who, no doubt, gets caught up in the temptations of the rah-rah patriotism/machismo of the story, which is based on the true life of Navy SEAL sniper Chris Kyle, who became a military legend through four tours of duty in Iraq. There is no single second of subtext in this movie. It feels more like a recruiting film than a narrative story, with equal subtlety. The absolutely ludicrous script from Jason Hall doesn’t help. Neither does the trying-too-hard performance from Bradley Cooper. Elephant Man on Broadway, character roles where he gains weight and creates tics or chews scenery—-stop “acting” so hard, Bradley, it’s showing. And it’s not working. Maybe you’re just best as the pretty boy from The Hangover and it’s time to accept it. I know you want the career re-invention (and the Oscar) that McConaughey has, but, guess what? You just don’t have his talent. Or, apparently, his agent.

American Sniper misses the target. (Now THAT was too easy.)