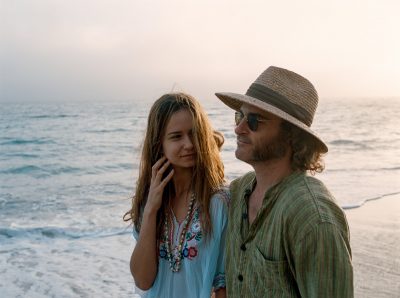 Since I was not familiar with author Thomas Pynchon’s works, I went online to see how some have described his writing. Here’s a sampling:

“And, of course, there is simply the sheer beauty and breathtaking power of the writing, the subtly interwoven plots and themes”

“With novels that some critics have called ‘unreadable’, paranoiacs and conspiracy theorists lauding his techniques, a reclusive nature and a lack of public interface, Thomas Pynchon has a mythic but daunting cult status.”

Sounds like the perfect source for Christmas-movie fun to me!

But seriously, I give director Paul Thomas Anderson every credit for being the first to bring a Pynchon novel to the big screen, given the obvious challenges. Inherent Vice, based on the Pynchon novel of the same name, stars Joaquin Phoenix and is set in 1970 Los Angeles and is a crime/comedy hippie haze of a movie that is as deep as it is utterly confusing. But, now that I know a little more about the source material, I can see the inherent difficulties in adapting a Pynchon novel and it makes me wonder about the wisdom of even trying in the first place. No matter the effort I am happy to see from a first-rate director and a top-notch cast, when the material is this dense, this detailed and this meant-for-the-page, sometimes the transition to the screen is just too difficult a task. Watching Inherent Vice, I kept thinking, “I would probably love this book.” But the movie? Not so much.

Anderson, who also adapted the novel for the screen, has directed some of our richest and most textured films of the twenty years, including The Master, There Will be Blood and my favorite, Boogie Nights. I was hoping to find some of the pathos, dark humor, texture, color, characters and depth in Inherent Vice that were so richly delivered in those films, but instead it felt rambling and random, caught up in the myriad plot twists, character introductions and drug-addled monologues that seemingly would work in a novel but grind a visual medium to a tedious halt.

Perhaps worst of all, at least for me, is that fact that I couldn’t get out of my head the comparisons to the Coen Brothers—the fact that Inherent Vice sounds and feels like a combination of so many different Coen Brothers movies, especially The Big Lebowski, but without the visual flair, the personality or the vibrant characters.

Inherent Vice isn’t a terrible movie, it is just an acquired taste. Joaquin Phoenix is great, as always, and Josh Brolin steals the movie in a terrific role as a questionably-moral cop. But, as an experience to sit through in a theatre, this certainly will be a love/hate proposition, which sounds very much like a Pynchon novel itself. If you want to understand what’s going on in your movies, you’ll want to skip Inherent Vice. But, on the other hand, if you consider yourself a brave soul who can take on the dark underbelly of life, can handle a little paranoia and appreciates some drug-addled randomness and free-flowing cinematic expression, then, by all means, follow Paul Thomas Anderson down the rabbit hole, man. Groovy.