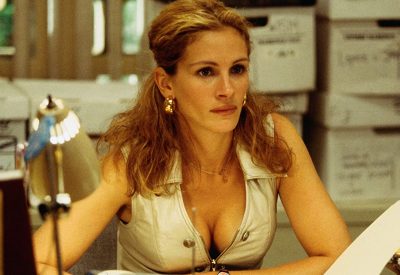 William Goldman, a famous screenwriter and analyst of Hollywood and its machinations, says two things about stars: one, all they are needed for is to “open” a picture, and two, despite their skyrocketing salaries, the ones that can “open” a film still don’t make what they deserve. I can’t help but agree with him after seeing Erin Brockovich. The film is a nice enough story, has a decent director, is quite entertaining, but, with Julia Roberts, the number one female actress on the planet, in the lead role, Erin Brockovich is a blockbuster. It has already made $76.2 million in just 17 days of release and is on track to become Robert’s eighth $100 million blockbuster, following in the footsteps of her two most recent hits, Runaway Bride and Notting Hill. Without Roberts in the lead, Erin Brockovich would barely have made a dent in the box office, despite quite possibly being the same movie. But, when you’ve got gold instead of bronze, people flock.

Another thing William Goldman says (you’ll have to pardon me, I’m currently in a William Goldman blitz, having just finished his compilation of essays entitled Who Killed Hollywood? and in the middle of his current book, Which Lie Did I Tell: More Adventures in the Screen Trade. Both must-reads for anyone who in interested in the workings of Hollywood, by the way) is that stars can only help a picture if the star is in a role which the audience wants to see them in. People want to see Bruce Willis as an action hero, Hanks as the guy next door, Costner as the leading man. When Julia Roberts went period and dark on us in Mary Reilly, nobody came. It was still Julia Roberts, but it wasn’t “our” Julia Roberts. She returned to her Pretty Woman glory with Notting Hill and followed with Runaway Bride, both romantic comedies where she could smile a lot and be charming, which is how we want to see Julia Roberts.

While Erin Brockovich isn’t quite as light-hearted as those two previous blockbusters, it still provides ample opportunities for her to charm and to win our hearts. And she does. Mightily. The cleavage doesn’t hurt either.

Erin Brockovich, the film, is based on a true story of a crusading single mother, the real Erin Brockovich, who uncovered a A Civil Action-type corporate crime perpetrated on the innocent inhabitants of a small town in California. While not a lawyer, Erin does get involved and ends up being the hero in this David and Goliath tale where good triumphs over evil and the innocents are vindicated.

Sound familiar? It should. You’ve seen it lots of times, most recently in A Civil Action, starring John Travolta. But if you go to see Erin Brockovich, and you should, you won’t be going for the story. You’ll go for the telling of the story. The difference revolves around the Brockovich character, played by Roberts. You want to see what she’ll do next, what she’ll say next. I actually wasn’t even interested in the story, I pretty much knew how it was going to end when it began, but I wanted to keep watching her go through it. And the experience is only enhanced by her love/hate relationship with her boss Ed Masry, played by the brilliant Albert Finney. The way Finney and Roberts work off of each other is a joy to behold.

This picture is not an award-winner. There are no fireworks, no special effects, nothing truly extraordinary. It is the coming together of a solid story, a solid director (Steven Soderbergh, whose last two films were The Limey and Out of Sight) and two incredibly solid leads, in Roberts and Finney. And it works. It gave me all I could ever ask for for my $8.50: I was entertained. And if you’re not a Julia Roberts fan yet, you will be now.