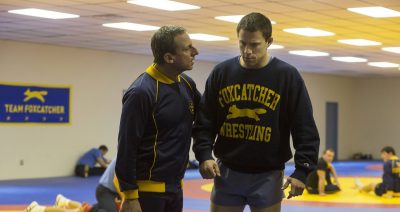 There aren’t too many things more damaging to the human psyche than the abuse of trust, power or love, but what if any or all of those things aren’t even earned? Director Bennett Miller’s (Capote, Moneyball) new film, Foxcatcher, is a searing examination of what can happen when power, trust and love are allowed to be bought and then are not only abused, but perverted, twisted and then maliciously destroyed. Foxcatcher is very similar to Capote and Moneyball, Miller’s other two films, in that it is a deliberate and thoughtful film that takes you deep inside its subject matter, delivering indelible performances in a slow-moving but fascinating film that will go far this awards season, and rightfully so.

Foxcatcher is based on the true story of millionaire John du Pont’s obsession with USA wrestling in the late ‘80s. After the 1984 Olympics, where wrestler brothers Mark and Dave Schultz won gold, du Pont invites both of them to his estate in Pennsylvania, to his state-of-the-art training facility, with the intent of sponsoring, mentoring and coaching the next group of champions to win in Seoul in 1988. Mark, easily won over and taken in by du Pont’s lavish lifestyle and patriotic pitch, quickly falls under his spell but Dave is not so easily enchanted. Having retired from competition, Dave has become a respected coach of many promising wrestlers—including Mark—as well as a husband and father. He is not so quick to uproot everything, no matter the common goal and enticing financial offer. But the hard truth of Foxcatcher is that money can buy anything, it seems, as du Pont does eventually get what he wants. But Dave’s presence at Foxcatcher, as the training facility is known, becomes a double-edged sword for du Pont. While the success of the team depends on Dave’s coaching prowess, he undermines du Pont at every turn, especially in his relationship with Mark, which has become manipulative and controlling. The ensuing battle for Mark’s respect and love—akin to the battle for his soul between good and evil—is where Foxcatcher gets its real teeth and draws you in. It is a fascinating look at class, values, ego, and, above all, a relentlessly brutal morality tale of the limitless power money can buy and, ultimately, the twisted remains of humanity it can leave in its wake.

Despite these wide-ranging themes, screenwriters E. Max Frye and Dan Futterman have managed to create an extremely intimate story that focuses on three incredibly specific and well-drawn characters who are individually unique and textured, which is the real strength of this film. There is a real sadness and delusion in du Pont, a genuine loneliness and desperation in Mark, and an honesty and goodness in Dave that make each character relatable and believable. And the way the three of them relate and engage with each other is so compelling to watch, Foxcatcher is a dynamic triptych that works on all levels.

And Foxcatcher is a three-way acting tour de force as well. I can’t believe I ever would have written these words, but Channing Tatum has arrived as an actor. To imagine he could ever hold his own with Mark Ruffalo is significant. And to think he almost carries this movie is mind-blowing, but he does. Hollywood must wonder what on earth they did to have had this actor fall into their lap, someone who can play roles like this—physically demanding that require athleticism and believable physicality—who can actually act. Most guys with Tatum’s physical attributes are counting their millions in action movies, but Tatum has made smart artistic choices and is blossoming before our eyes. Here, he is perfect as the meathead who knows nothing else in life except wrestling and is easily taken in by du Pont’s promises. Tatum plays Mark Schultz like a puppy—easily lured, easily pleased, easily wounded—and quick to lash out. But his self-loathing is evident as well, and what makes him vulnerable to du Pont’s manipulations. And Tatum plays every element of the character with nuance and raw power. I take back everything I ever said about Channing Tatum and I’m happy to say I was wrong. He is fantastic in this role that is perfect for him.

Almost as big a surprise is Steve Carell, who plays du Pont. Steve Carell playing a super-serious, super-slimy character in a serious Oscar bait drama? Well, if Channing Tatum can really act, anything can happen, so…yes. And guess what? Carell is awesome too. I do have to say, though, that he’s not quite as good as everyone is saying. The prosthetic nose gets too much in the way, literally and figuratively, at least for me. It affects his performance and makes it a bit too forced and stiff, and I was too aware of the fact that he had this thing on his face and he was creating this character. Once I got past that, however, I was able to appreciate the nuances of what Carell was doing, but it may have been a few too many hurdles for me to jump.

The real bravura performance of this film, for me, though, is Mark Ruffalo, who absolutely shines as Dave Schultz. Ruffalo transforms himself into his character (sans rubber nose), and you believe who you are seeing for every second. With Ruffalo, it’s all about the little things, the movements, the characterizations and small moments. While Carell and Tatum are doing all the big things, Ruffalo is quietly balancing the movie out, making everything work. Foxcatcher would be nothing without Ruffalo’s level-headed, quietly powerful—and most memorable—performance.

As for the experience of the film itself, much like Moneyball or Capote, you are transported into the world of the movie and you linger there for the entire film and it is captivating. The wrestling scenes are staggering—they feel incredibly authentic and are stunning to watch, not only for the physical commitment these actors had to have made to their roles, but because of the dramatic effect they offer to the film itself. And even though I normally love film scores, the fact that this was probably the most minimalist score I’ve ever heard, the quiet of this movie really allowed me to focus on the characters and the subject and forced away any melodrama and sentimentality that could have easily crept in. It was a bold and effective choice.

In the end, the only thing really lacking in Foxcatcher is an emotional connection, but that’s not really necessary. Between the performances, the intricate and compelling screenplay and the completely involving subject matter and the commitment to it by all involved, Foxcatcher is one of the best investments you’ll make at the movies this year.