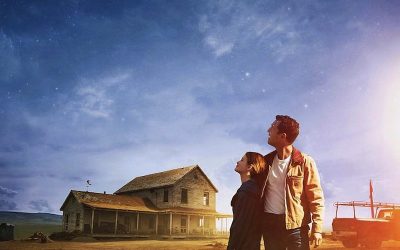 A friend who knew I saw Interstellar last night asked me how it was, but before I could say a word, she held up her hand and said, “if you mention Gravity, I’m out.” See, she and I have been having the Gravity debate for a year now, as it was my favorite movie of 2013, and she hated it. So I stopped, looked at her and burst out laughing. I laughed not because there is much similarity at all between Alfonso Cuaron’s blockbuster space disaster movie and Christopher Nolan’s ambitious and highly-anticipated futuristic space travel mindbender epic—besides being set mostly in space. I laughed because if you are looking to escape the word gravity, Interstellar is the wrong movie to see. Yes, gravity, as in the force that keeps us all connected to Earth, as opposed to randomly floating out in space. Gravity is one of many scientific concepts that director Christopher Nolan, along with co-screenwriter Jonathan Nolan, explores throughout Interstellar, a magnificently mind-blowing adventure through space and time that will make you feel at moments like you are watching Spielberg, at other moments Kubrick, but, in the end, it is Nolan who leaves his unique imprint on this massively idea-driven film that will not only expand your mind, but will expand everything else you have ever known (and didn’t even know you didn’t know).

Interstellar takes place in the future, it’s not made clear exactly when, but it’s a bleak future where Mother Earth is nearing the end of her ability to provide for us (a not-so-subtle global warming message?) and NASA scientists have a brilliantly optimistic, albeit wildly unlikely, idea of how to save humanity: find another planet that’s viable to sustain life and move there. The problem? Finding the right place. Former NASA pilot-turned-farmer Cooper (Matthew McConaughey) agrees to captain a mission to inspect possible sites, even though it means he may not ever return to his father, son and daughter, left behind to care for their struggling farm.

Interstellar certainly has the most heart of any Nolan film I’ve seen, and a lot of that is a credit to McConaughey, who is touching and natural in the family scenes that start the film. They provide the emotional foundation for the sci-fi adventure that follows. McConaughey may not be the best in a spacesuit, but he’s pretty good on terra firma.

But once the movie does take off into space, the star of the movie most definitely is Nolan, where his love of conceptual movie-making really takes off. Interstellar may not always make sense—even the parts you think you may understand—and some parts may actually push the limits of downright outlandishness, but what Nolan does consistently deliver in his films is a dynamic cerebral quality that you don’t get anywhere else. Christopher Nolan believes strongly in the concept of go big or go home and that wow factor is certainly on display here. If you are any fan at all of big ideas and deep thinking and broad scientific theories and serious debates about ethical and moral dilemmas that may or may not involve the future of humanity, then Interstellar is right up your alley. If, however, you are looking for a simple movie to escape the gravity (ha!) of everyday life, may I suggest something else, because Interstellar is the furthest thing from simple and it prides itself on delving as deeply into concepts and ideas as a human mind can possibly mine.

And yet, Interstellar is still an adventure movie. There is an awful lot of action for a movie with so much talking about ideas and science, I will give it that. As I mentioned, there is the family stuff, which feels very Spielbergian, there is the space stuff, which, at times feels a little Kubrickian (or maybe Ridley Scott?), but then the Nolan kicks in when we hit the mind-bending stuff and that’s when I really started to like Interstellar. Even though it feels like three different movies, the one I really like is the one that messes with your head, the one that forces you to confront the immensity of the universe, the complexities of time and space and all the variables that come with narratively toying with those elements, along with other little things, like black holes and worm holes—those cool things that can literally bend and swallow time and space. You know, the simple stuff.

The visuals are stunning as well, and it goes without saying in a Christopher Nolan movie that the special effects are first-rate. Hans Zimmer’s score, however, sometimes drowned out some dialogue, which I found frustrating, but that was the only technical flaw in an otherwise technically masterful film. I was lucky enough to see the movie in classic 35mm, as Nolan is one of the few directors with enough clout to be able to still shoot on film stock. It took me a while to get used to watching a movie on film again, but I loved it. I do also recommend you see this movie on as large a screen as you can find, it deserves the effort and your experience will be the richer for it. As for the supporting performances, Jessica Chastain does excellent work with a role that she’s not given much to do with. Michael Caine does his best Morgan Freeman impersonation, arriving early on to establish the story and then make a key emotional appearance again at the end, with little or no actual character development, and what there is turns out to be quite cheesy. I was a bit disappointed by Anne Hathaway, but, then again, all the good stuff was given to McConaughey, so she had to fight for whatever scraps were left.

My biggest gripe with the script comes with a major plot point that I can’t talk about here, but let’s just say that the story makes a turn about two-thirds of the way through and it felt very ham-fisted to me and it took away much of my respect for the story.

However, nothing can take away what Nolan has tried to do here with his ambitious attempt to blow our minds. Interstellar may not be perfect, but I loved the way it balances the crisis on Earth with what could possibly be our options “out there”—this serves as a hearty foundation—and then happily soars off into twisty-turny, Mindbendy Land that we can either take with a usual grain of Christopher Nolan salt or just go and have tons of fun with. Either way, Interstellar is an intense, heady, trippy, gorgeous ride that you just don’t experience every day which I heartily recommend. This is what movie-making is all about.

And no, it’s nothing like Gravity. (Even though that movie WAS a masterpiece.)