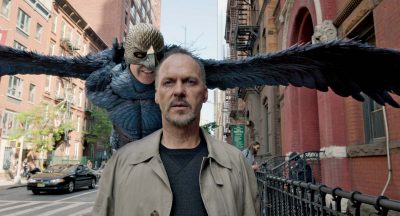 Last year at this time, we were talking about Gravity, Alfonso Cuaron’s virtuoso cinematic achievement which went on to win seven Oscars, including Best Director and Best Visual Effects. Hard to believe, but Cuaron’s countryman Alejandro Gonzalez Inarritu (Babel, 21 Grams) has now upped the ante. Inarritu’s newest feature, Birdman, is itself an exercise in cinematic wizardry, but of a completely different nature and with vastly different effect. What made you hold your breath in Gravity makes you breathe faster in Birdman.

Birdman will make headlines for being the “comeback” of Michael Keaton, but it should be talked about for so much more. Keaton plays a washed-up actor who was famous for playing a superhero in the movies, but is now trying to revive his career by writing, directing and starring in a play on Broadway. The movie takes place almost entirely backstage at a Broadway theatre and is so incredibly meta your head will spin. Between Michael Keaton actually being a semi-washed up actor who really did play a superhero in his career, to us watching a movie about a play, and then all the actors doing nothing except talking about acting—this movie gets so inside itself so fast it turns itself inside out before you figure out which way is up.

And then you realize that’s exactly the point.

This movie grabs hold of you, spins you around and takes you on a ride, right into the belly of the whale. There are movies that tell you a story, but Birdman puts you right in it. Your eyes are those of magnificent cinematographer Emmanuel Lubezki (Gravity, Tree of Life), and your pulse is Inarritu’s. It’s impossible to look away, even for a second, once you realize what’s going on. And there is so much going on—so many layers, technically, thematically, emotionally. It feels like a ride down raging rapids, thrilling and nerve-racking. It’s hard to say too much without giving away too much (it should be experienced) but let me just say there is filmmaking here and technical skill that is far above craft—it is pure art. And the result is an immersive experience that is intimate and consuming and once you really see it, you won’t be able to help but say “how did they DO that?!” and rush back in and see it again from the beginning (I know I want to).

And then there are those performances. Within this delicate, sometimes brutal dance Inarritu has created, the actors find a way to deliver some of the most intense, raw and revealing performances I’ve seen. Edward Norton is the best he’s ever been as the too-intense actor with too much talent but nothing else, Naomi Watts is great as the insecure actress making her Broadway debut, Zach Galifianakis breaks type and is surprisingly good and you’ve never seen Emma Stone like this—cynical, tough and disheveled—and I love it. But Michael Keaton is the headline here, obviously. He hasn’t starred in a movie since Jack Frost in 1998—that’s an eternity in Hollywood years, which makes this part a perfect fit for him and he delivers. He captures his character’s pathos and self-doubt well and conveys the roller-coaster of emotions the character travels.

Unfortunately, the one place Birdman falls short is in giving Keaton (and the rest of the cast and crew) a stronger script to work with. We get early on the existential crisis that Keaton’s character is having, but that runs its course pretty quickly and the rest of the movie treads over the same ground again and again. For a movie that is attempting to be deeply philosophical, it’s bizarre that it couldn’t provide the characters more depth, especially Keaton’s character, who, in the end, we don’t really know at all.

But, character building aside, there is still so much in Birdman to love—the dialogue crackles, the pace is frenetic, the satire is biting, the filmmaking is absolutely sensational and the performances are award-worthy. And for anyone who knows or loves theatre or actors, this movie is the ultimate inside joke/homage/poem/punch in the groin/knowing wink.

If there’s any part of you that loves filmmaking, acting, theatre, art or satire, get to see Birdman immediately and bask in this near-genius piece of movie magic. Your move, Cuaron.