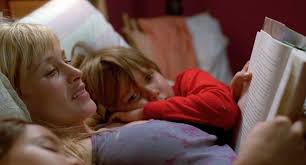 I honestly haven’t decided yet if Richard Linklater is a secret genius or just a guy still stuck in film school trying desperately to complete that last assignment that he never got right. But, either way, I’ve got to give the guy credit. While other directors in Hollywood seem to be chasing fame, status, awards or money, Linklater seems to be legitimately interested in his craft.

Last year saw the completion of Linklater’s 17-year, 3-film odyssey with the release of Before Midnight, the final act of a love story that began in 1995, starring Julie Delpy and Ethan Hawke. That trilogy, Before Sunrise (1995), Before Sunset (2004) and the finale in 2013, gained masses of fans around the world and earned director/co-writer Linklater cult status as a critics darling—they loved the fact that he broke the rules, did something different, expanded his thinking and gave the audience a fuller, more complete story, one that was rich and full and about the human condition—about love, about life.

Granted, I wasn’t as bowled over by these movies as most of the critics were, but I was taken by them. I loved getting to know the characters intimately, seeing their relationship blossom, take hold, grow and eventually fizzle, as most relationships do. It was relatable, it was real. The writing was powerful, the acting was nuanced and memorable, particularly Delpy’s. There’s nothing to speak of cinematically, but that’s not the point. The point is in the essence, the heart and the soul. I didn’t start with these movies in 1995, unfortunately, so I can’t say what it was like to wait 17 years for the conclusion of the story, but I know there were a lot of people who did and all I can say is, wow, that’s impressive. That’s something for a filmmaker to connect with his audience that way. And good for him—to have that vision, that commitment and dedication to his project, while also being a sought-after Hollywood director—he directed several other movies during the span, including the hits School of Rock (2003) and Bad News Bears (2005).

And yet, that’s not even what makes Richard Linklater the genius/film school maniac that he is.

Aside from keeping the flame alive on a 17-year movie project or actually directing films on a regular basis to pay the bills, he had a third venture going on from 2002 to 2013. This project was called Boyhood and it would be similar to the Before Sunrise trilogy except, instead of 3 movies spread out over a period of time, Linklater would hold onto 12 years of footage and deliver it all at once in one movie. The result? The story of one boy’s life, from age 6 to 18.

What is remarkable about Boyhood? Well, just that. It is literally a film about a boy growing up. While I don’t consider it the revelatory masterpiece that some are calling it, the film is unlike anything you’ve seen before, unless you grew up with a brother and spent 12 years staring at him. What’s fascinating about this film is to see life compacted this way. To see what we all see, what we all go through, the everyday details of life, stupid little things, major impactful things, all played out in 2 ½ hours onscreen. It feels real because, well, it almost is. We watch actor Ellar Coltrane (and other actors, including Lorelei Linklater and Patricia Arquette) grow up and older in front of our eyes, it’s like watching time fast-forwarded, which is a little unsettling, but, at the same time, completely engaging. Linklater shot this movie over a 12-year span, using the same actors, so the physical changes we see in the actors are the same we see in the characters and vice versa. What is usually achieved with makeup is done here by time.

Boyhood is more a study of life and family and humanity than a film, I would venture to say. Sort of The Tree of Life without all the razzle dazzle. It’s very simple and honest and exceedingly organic. I wasn’t necessarily moved by this film, but I was intrigued. Nothing feels forced or fake and nothing goes too far. And, for a movie that was shot over one week a year for 12 years, it has an exceedingly even flow, there is nothing jarring or disjointed at all for the audience, which is perhaps the greatest compliment of all. To keep a fictional narrative story coherent over such time with those kinds of breaks must require tremendous planning, great writing, patient editing and a very dedicated director. The end result is a real testament to all of the above.

Boyhood is not for the casual moviegoer, just as Richard Linklater is not the casual filmmaker. But if you seek out films that strive to be different and love to see artists who love what they do and continue to find new ways to express themselves and share their vision with the world, you should definitely seek out this film. The guy whose first movie was called Slacker certainly has come a long way.