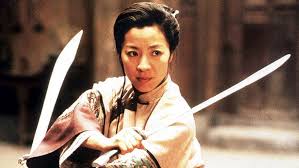 Give Ang Lee the keys to the kingdom, please. Look at what this guy can do: his directorial debut was The Wedding Banquet, a gay-themed comedy. Then he directed Sense and Sensibility, an English period drama. Then he blew the critics away with The Ice Storm, an American surburban tragedy. And now he delivers Crouching Tiger, Hidden Dragon, perhaps the most ambitious film yet from the most ambitious (and certainly multi-talented) director in Hollywood. A martial arts film/romance/drama/comedy all rolled into one, it stimulates the eye, the ear, and the soul as it weaves ancient Chinese legend with eye-popping effects and fight scenes to surpass any action flick. Subtitles or not, this film deserves to be named among the year’s best and should be recognized come Oscar time. And Ang Lee should finally be recognized for the visionary that he is.