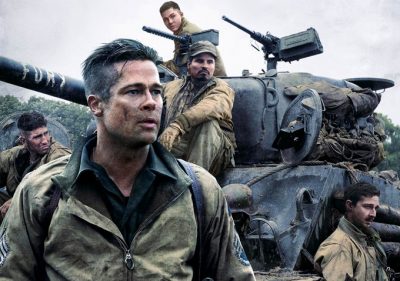 I’ll make this short and sweet. Brad Pitt’s new movie Fury: pretty good for a war movie, despite the neverending array of war movie clichés that run rampant throughout. Brief synopsis: Brad Pitt plays a U.S. Army tank sergeant in Germany during World War II and the movie follows his tank, its crew and its missions during one very busy day towards the end of the war. The best parts of the movie are when we see the interactions between the tank’s (nicknamed Fury) crew members and the edge-of-your-seat action sequences, which made me realize that, in all the many war movies I’ve seen, I’ve never really seen great tank battle scenes. This movie changes all that. Sadly, though, Fury is held together only by the audience’s desire to see more of these scenes, because the clichés do get tiring after a while and you learn to give up much hope for interesting dialogue or character development. But still the movie held my interest for the 2-plus hour running time, thanks to the fast pace and the nearly universal appeal of the actors. Pitt is serviceable as the lead, no surprises there. The real shock comes in how watchable Shia LaBeouf is, even powerful at times. Logan Lerman and Michael Pena are great as well. But the huge, glaring weak spot is Jon Bernthal, who mumbles and overacts his way through every single scene, to the detriment of the film. Thankfully, however, the action scenes and the fast-paced directing by writer/director David Ayer (End of Watch) makes Fury a worthwhile experience, if this is your kind of thing. Just don’t expect anything more than a well-made war movie which treads extremely familiar territory.