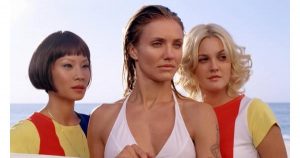 Gene Shalit needs to get a sense of humor. And a haircut. His review of Charlie’s Angels 2: Full Throttle has angered me so much that I have to pass my ire onto you.

Stop reading the reviews. It’s summer. You know what The Hulk is about and whether it’s your cup of tea. Same with Legally Blonde 2. And Dumb and Dumberer. And Terminator 3. And Freddy vs Jason.

C’mon. Do you really need a REVIEWER to tell you whether to go see Charlie’s Angels 2 or not?

But that’s not really my point here. My point is that Gene Pull-My-Moustache Shalit had the gall to spend his allotted time on this morning’s Today Show to blast at Charlie’s Angels 2 for being mindless, plot-less, and a “waste of talent.”

Did he even SEE the first installment in this soon-to-be film franchise that is a tongue-in-cheek remake of the classic ‘70s television show, starring Drew Barrymore, Cameron Diaz and Lucy Liu? If he had, he would understand that the film is made in the same spirit as are all the Austin Powers films: not just to not take itself seriously, but to NOT BE SERIOUS AT ALL.

What makes Charlie’s Angels, the film version, so wonderful to experience, is the same sense of fun that enlivens the Mike Myers franchise. No realism. No serious story-telling. Just a lot of over-acting, campy dialogue, outrageous outfits, state-of-the-art cinematic trickery, and a lot of gags. You certainly do have to pick your audience to see Charlie’s Angels with. If you select an older audience or one with lots of teenagers, prepare yourself for a miserable experience. If you surround yourself with twenty and thirtysomethings (preferably on the West side), you’ll probably have a better time. Not because the jokes are necessarily “in,” but just that the film is AIMED at them. And that makes all the difference.

To call this film a waste of talent is a mind-boggling mis-statement. This film finally proves something that some of us have known for a while: Cameron Diaz is a STAR. And she is utilized to the hip-swiveling, tooth-grinning, eye-popping fullest in this film that sizzles every time she’s onscreen. Barrymore and Liu are wonderful bookends, but Diaz is the driving force. Demi Moore makes a formidable presence in this film as well, and there’s nothing wasteful about it. Director McG (c’mon, you can’t even take his NAME seriously!) knows what he’s good at. He makes music videos.

Tongue-in-cheek is a very tricky art. Some may disagree, but I think Charlie’s Angels masters it. Its self-effacing style is so sincere that you can’t help but be carried along through all the unbelievable “plot” contrivances and muddy narrative structure. The stunts are so physically impossible, but so are the stunts in The Matrix, and I found the ones in Charlie’s Angels to be much more enjoyable (read: fun) to watch.

Look, I’m not going to convince you either way about this film. You already know whether you want to see it or not. What I will say is that if you’ve decided NOT to see it because some reviewer has gotten all serious and trashed it for its lack of cinematic virtue, then you are missing out on a lot of fun.

My rating: *** Worth paying full price