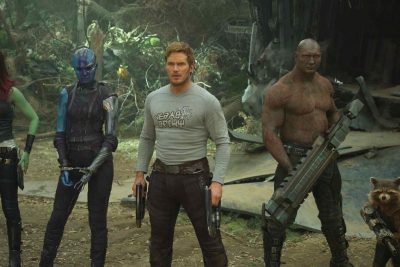 Just when I was beginning to lose hope for movies and accept the fact that television is far more entertaining these days, they pull me back in.

Guardians of the Galaxy—who knew?!

Seriously, I had almost forgotten how much fun movies could be. Remember when I was lamenting the lack of fun in the last X-Men movie? And decrying the over-sentimentality of Maleficent? Well, hallelujah, we finally have a Hollywood big-budget blockbuster that is not only fun but is smart, snarky and a hundred types of awesome.

I knew nothing about Guardians of the Galaxy. Apparently, they are Marvel comic book characters. (How many are they?) Well, either way, I was clueless going in. Was I going to get another cookie-cutter superhero movie? Was it going to be another mindless smash-and-grab-our-money job, with confusing plot, brooding characters, overly serious themes and loud and ever-present destroy-everything-in-sight scenes distracting us from the fact that the movie is just a giant CGI-fest with nothing of substance and even less of entertainment value to speak of?

Yup, I knew nothing about Guardians of the Galaxy.

So here’s the only non-depressing thing about the fact that Raiders of the Lost Ark and the original Star Wars came out 37 and 41 years ago, respectively: the kids whose minds were blown by those movies are now the adults who are making movies and writer/director James Gunn is one of them. Nowhere will you see the childhood influence of Raiders and Star Wars more vividly than in Guardians of the Galaxy, a sci-fi romp through the galaxy that will satisfy anyone with a yearning for a good, old-fashioned adventure tale, laced with wit, heart and a damn rogueish good time.

I want to do everything I can to encourage you to go out to see this movie, in the theatre, as soon as possible. That does not include telling you too much about the movie, so I won’t. To clear up some misconceptions, however, I will tell you that there are humans in the movie (it’s not all animatronic raccoons, despite marketing ploys to the contrary), and the main human, Chris Pratt, best known for his regular role on the television show “Parks & Recreation”, is perfectly cast and is a breath of fresh air in the starring role here. The other roles, including Zoe Saldana, in yet another full-body paint job, the voices of Bradley Cooper and Vin Diesel and former professional wrestler Dave Bautista, all are spot-on as well, building an ensemble that not only has great chemistry together, but are fun to watch individually.

The visuals are also spectacular, from the Oscar-worthy makeup (seriously, how do they do that?) to the awesome CGI effects (Vin Diesel’s best character yet—worth the price of admission to see what I’m talking about), but by far the star of Guardians of the Galaxy is what should always be the star: the script. Apparently, this movie stays true to the comic books, which is, in itself, a tough task, but, to deliver a film that is not only coherent but also entertaining to someone who neither knows nor cares about the comics (like me), is an effort not only harder than it seems, but one that has been attempted and failed on more than one occasion recently. Screenwriters James Gunn and Nicole Perlman deserve every credit for delivering a script that is accessible to everyone, from fanboy to neophyte, and creating a film that is character-driven, chemistry-based and actually cares about little things like story and dialogue. Sure, there are big, action sequences—this is a summer blockbuster, after all—but, unlike recent disasters, these sequences fit with the rest of the movie, they are entertaining and nothing is numbing. But Guardians of the Galaxy wins you over in all the other moments, the moments that remind you why you love movies. This movie is overflowing with spirit and energy, and doesn’t mind laughing at itself. Did I mention it’s a hell of a lot of fun?

If you still think Guardians of the Galaxy is not your kind of movie, I have a brief test for you to help you out:

If you said yes to any of these questions, go see Guardians of the Galaxy today. You will not be disappointed.

2014 finally gave us what it’s been holding back for 8 months. It’s about time.