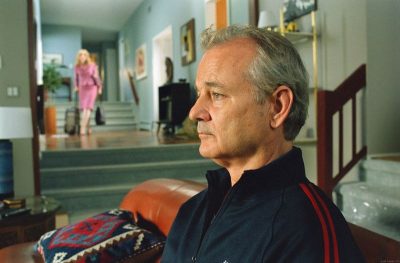 I wonder if Sofia Coppola knows that Jim Jarmusch saved her a great deal of time and effort writing and filming a sequel to Lost in Translation.

If Broken Flowers isn’t a sequel to the indie hit of last year, you could’ve fooled me. Bill Murray, who was brilliant in Lost in Translation as a middle-aged man lost in the world, plays virtually the same character in Broken Flowers—and elicits about the same amount of emotion and expressiveness. That’s not to say Jim Jarmusch doesn’t deserve credit for creating a unique character, but he had to notice the similarities, especially when he cast Murray, who spends 80% of this picture saying nothing and has seemed to have carved out a new career as an actor who just stares off into space while the camera lingers on his face for minutes at a time.

Not that I’m complaining, actually. I love Bill Murray, and I enjoyed this film. I’m just sort of stating the obvious that if you are expecting to see the Bill Murray of Ghostbusters, you should stay away.

There are a few filmmakers who dance to the beat of their own drum. Some find extreme commercial success, like the Coen Brothers or Woody Allen, and others, like John Waters, are content with their niche audience and permanent relegation to the “independent” cinemas. Jim Jarmusch is one of those rebel filmmakers who answers to no one. His most recent creation, Coffee and Cigarettes, was an odd and offbeat film that garnered widespread critical raves and limited audience attention. I think Broken Flowers will do slightly better, mainly because it actually has a semblance of a story. And it doesn’t hurt that his cast is made up of such names as Bill Murray, Jessica Lange, Sharon Stone, Frances Conroy and Julie Delpy.

Of course, with Jessica Lange in the cast, I went into the film rooting for it, and I left pretty much the same way. This film is quiet and slow, and, like Lost in Translation, has an ending that is left to the audience’s imagination. It has its odd moments, that goes without saying, but, for the most part, Broken Flowers is Jim Jarmusch at his most accessible—and that just may translate to a bigger audience for a filmmaker who might just prefer to be unknown.

My rating: **= worth paying discount price in the theatre