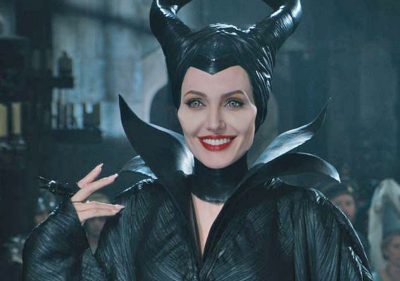 I got to thinking yesterday about happy endings. It was a day of endings, some exceedingly happy, like the thrilling and, for Los Angeles fans at least, awesome end of a riveting game 7 (in overtime!) of the Western Conference Final that sent the Kings to the Stanley Cup Finals for the second time in three years. Then there were the not-so-happy endings, like the latest episode of Game of Thrones, the HBO series that makes a habit of taking your heart out and stomping on it, week after week. Seriously, when will we learn.

But the day started with a visit to the movie theatre for Maleficent, Disney’s latest family fantasy blockbuster, starring Angelina Jolie, which promised a trek down memory lane as it was said to be a “reimagining” of the classic Sleeping Beauty fairy tale, this time as seen through the eyes of its villain, the evil queen–she of the famous curse and horns. I was looking forward to seeing this new spin on the story, and, most of all, I was looking forward to a potentially darker tone for a children’s movie, which would really be the trek down memory lane. Kids’ movies these days seem to be all bright colors and light. Nothing against Pixar, I love Pixar movies, they are technically brilliant, and heartfelt, but where is the depth? My favorite movies when I was a child were The Rescuers (1977) and 101 Dalmatians (1961). These are deep, dark movies, man. Correct me if I’m wrong, but the most devastating thing that’s happened in a Pixar movie so far (that got everyone weeping, including me), was the scene were toys almost—almost—go down an incinerator. When I was in a showing of Despicable Me 2 recently, I saw a parent take their kid out because there was something that made them cry. Really? What on earth could upset you in the minion movie whose theme song is “Happy?” So I ask you: do you really think kids today could handle a movie about puppies being kidnapped so they can be skinned for their fur? And don’t even get me started on Bambi or Dumbo. Kids today don’t know true sorrow. (Yes, I’m slightly bitter.)

So here was the chance for Disney to right the ship. An entire movie about one of the greatest animated villains of all time, Maleficent. Even the fanboys were coming out to see this movie, there was such a buzz and an excitement, between the seemingly-perfect casting of Jolie and the hiring of Robert Stromberg as the director. Stromberg had never directed a film before, but he has a rich history in Hollywood as a visual artist, a two-time Oscar winner for Art Direction for Avatar and Alice in Wonderland and a nomination for Visual Effects for Master and Commander: The Far Side of the World. Put the technical wizardry together with the perfect casting and there is the potential for greatness (and, hopefully, darkness).

And, for the most part, greatness came. First of all, Angelina Jolie is so good, so perfectly cast, so dripping with movie-star-ness that you want to cry. You never want to take your eyes off her and why should you? Unlike Charlize Theron in Snow White and the Huntsman, Jolie never once overacts or embellishes unnecessarily. She could have easily chewed all the scenery that surrounds her or eaten alive the wooden actors that share the screen with her (Sharlto Copley couldn’t be more miscast if they tried), but instead she clearly is focused on her own performance and, to her credit, she chooses to keep it quiet and determined, which makes for a much more authentically believable character—as believable as a woodlands fairy can be.

The dilemma here, clearly, was walking the tightrope between getting us to love and hate Maleficent, because if the story—and the movie—was going to work, we had to do both. She’s the villain of the story, after all, as we have been trained, since the original Sleeping Beauty animated movie of 1959, to hate her, but, at the same time, she is the hero of this tale, this is her story and, let’s face it, we can’t possibly hate Angelina Jolie. So there’s the rub. Well, the approach seemed clear and it felt brilliant: tell Maleficent’s Origin story. We see Maleficent as a child and we watch her grow up and we see how she actually becomes evil and, lo and behold, we are compassionate to the transformation. It was this part of the movie that I really loved, because this was the most reminiscent to the Disney movies of my youth. Cruelty happens, darkness floods her heart and we are saddened and angry for and with her. This is what I had hoped for! My heart leapt with all the sorrow!

But then….of course….it all had to change. A young blond perfect girl (Elle Fanning) melts her heart and the old white guy becomes the really evil one and Maleficent saves the day. Yawn. And….what? Where was THAT in the story? Oh, nevermind, this is Disney in 2014, we have to send the kiddies out smiling, I saw it coming a mile away. I just wish it hadn’t disappointed me so darn much.

Still, I’ll admit, in the end, I had a blast. This movie is miles better than any of the other reimagined fairy tales I’ve seen recently, especially Oz the Great and Powerful and Snow White and the Huntsman. Jolie’s screen presence is well worth the price of admission and despite the surprising lack of visual fireworks, the movie is nice to look at, especially the costumes. I guess if I have to endure a forced happy ending, if it looks as good as Angelina Jolie does in this movie, I guess I can handle it.