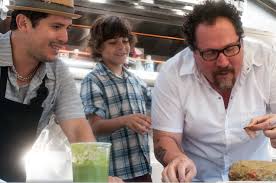 I was watching All the President’s Men again the other night (so good) and it struck me how rare it is to see a movie about someone just doing their job. No fluff, no time spent exploring backstory or detailing relationships or even revealing character personalities. The story is the pursuit of the story, i.e. the job. Period. And it is a nearly perfect movie.

There are a lot of movies about jobs. It should be no surprise, we spend most of our waking lives earning a living, what we do is woven into the fabric of who we are and how we see ourselves and how we define our character. But I’m also reminded of the majority of us for whom our jobs are simply a means to an end, a path to a paycheck and nothing more. We can’t all be astronauts and firemen and movie stars, after all. Office Space became a cult classic for a reason. It hit a nerve and may have been all too relatable.

So when a movie like Chef comes along, a small, wonderful film about an ordinary guy with an extraordinary talent and passion who just doesn’t know how to channel it, we can all relate. Chef may not take place in a cubicle farm, but it may as well, because the premise could translate possibly to any of our working environments: underappreciated worker bee with vast skills is pigeonholed and held back by his unimaginative boss, who fires him when he dares to be creative. What happens next could serve as a rallying cry for all of the weekend warriors out there—finding a way to follow your passions and actually loving what you do from 9 to 5.

Chef strays far from the cubicle farm, however. Written, produced, directed and starring Jon Favreau, Chef is a movie about, as you might have guessed, cooking. So the “cubicle” we would speak of is a kitchen and the “office” is a restaurant. Not many of us, I would assume, have intimate knowledge of such a world, so this inside look of the workings of a fancy restaurant kitchen is fascinating, exciting and savory (WARNING: do NOT see this movie on an empty stomach.) Favreau, who plays Chef Carl Casper, obviously took great pains to learn the ins and outs of “chef-ery,” as he films himself slicing and dicing and cooking up a storm throughout the film, all very impressively. This is a movie about cooking and if you like cooking, like to watch cooking, like to watch food, eat food or even like to look at food, this is your movie. This is the most delicious movie you’ll see in the theatre all year and I guarantee you’ll be drooling at some point. Vegetarians be warned, you will have to look away at a couple moments, but there are enough gorgeous fruit shots to more than make up for it. Seriously, if this movie were in Smell-O-Vision, they’d have to close down the theatre because everyone would have passed out from delirium.

As a film, Chef moves easily and comfortably, as it’s clear that Favreau’s directorial adventures on the blockbuster action movies Iron Man, Iron Man 2 and Cowboys & Aliens proves that he is totally at ease behind the camera. Those movies also prove Favreau’s penchant for tongue-in-cheekiness, which is on full display here as well, and fits in nicely. Besides the glorious cooking scenes, which I literally could have watched all day, there were several surprising plot meanders that I didn’t see coming, which were refreshing. Which is to say, I knew where we were going to end up, but the way we got there was unexpected, which was greatly appreciated. Favreau, as a writer, has the snarky stuff down pat, but he needs a little more work on the relationship and emotional stuff. The family and kid-bonding part of this movie is incredibly wooden and rings hollow and false. The only reason any of it held any water at all is because of the great performance by 11-year old Emjay Anthony, who plays Carl’s son. There are also great performances by John Leguizamo and Bobby Cannavale, as Carl’s chef buddies, as well as a brief but effective turn by Dustin Hoffman as Carl’s boss. In the biggest surprise of all, Chef did the unimaginable: it gave me a performance by Oliver Platt that didn’t make my stomach turn. Now that’s a true culinary delight. Overall, Chef is fast-paced, fun and will take you on a delectable tour of your senses.

So now that I’ve established that I enjoyed Chef very much and if you like cooking at all, you need to see it, this is the part where I must speak my mind and reveal the ugly truths about this movie. For how good it is, it could have been so much better. The irony of this in the fact that there is one person and one person only that held this movie back: Jon Favreau. Sure, I like this movie, so the fact that he produced, directed, wrote and starred in it means he gets the credit. But, sadly, everything that’s wrong with this movie is also his fault, and for those same reasons.

Reason one: the writing. I can get over this, because the movie is still enjoyable. But a better writer would have fleshed out the relationships better. The best relationships in the movie here are between the guy friends. It’s clear that Favreau knows how to write bro-mances and is not comfortable with family relationships. This is a movie where the central relationship is father-son. So, obviously, that hurts the film.

Reason two: the casting of himself as the lead. This is by far the biggest damage Favreau does to his own film. By casting himself as the star, he takes a film that could have been a potential Oscar contender and turns it into an ordinary mid-summer adult movie. I was just imagining what a real actor could have done in this role. I’m sorry, I’ll be the one to say it: Jon Favreau cannot act. He has zero ability to emote, no range, no charm and he’s nowhere near as funny as I think he thinks he is. There were big, emotional moments in this movie that fell completely flat because of him and, again, the movie is only saved because he is a talented director, a somewhat talented writer and he surrounded himself by talented co-stars. But, I’m telling you, if this movie hadn’t been so much fun to watch with all the cooking, I would have been in hell having to watch Jon Favreau on screen.

Reason three: the casting of the women co-stars. So here’s where I learned that, in Hollywood, a producer is willing to completely compromise the integrity of their movie in exchange for butts in seats. Ok, this may not be a new one, but when it’s this blatant, it hurts. I actually can’t decide what hurt Chef the most, the miscasting of Jon Favreau as the lead or the casting of Sofia Vergara and Scarlett Johanssen as way-too-obvious eye-candy. Not only is it clear that they are in this movie simply for their star power and for marketing purposes, but the absolutely only-in-Jon-Favreau’s-dreams story that has each playing parts that have them romantically interested in Favreau’s character? Seriously, on what planet are we to believe this? The storylines involving these two very talented (and gorgeous) actresses revolve around their characters’ gooey-eyed devotion to a schlubby, ugly, narcissistic, loser-y, hot tempered bad father who, until he hits the jackpot by someone else’s good graces is able to get his life on track is really not a nice guy, are emblematic of all that is wrong with the portrayal of the relationships between women and men in modern Hollywood movies. And the fact that we continue to buy it is not just insulting, it’s demeaning. Shame on you, Jon Favreau. Shame on us for still letting this fly. (And guess what? We don’t buy it.)

All that being said, I did like Chef. It’s just too bad Jon Favreau’s ego had to get in the way from it being a great movie. Still, if you go hungry, you’ll go home happy.