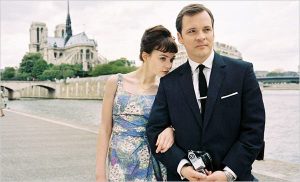 Ah, the coming-of-age story. You can’t throw a rock in Hollywood without hitting one. Youth rules the day, after all, and what better way to invest in a rising star than to feature them in a story of burgeoning sexuality or a tale of self-discovery and newfound independence. The trick, though, is to find a new way to tell the story, a fresh take on the same old material, a unique approach to situations and experiences that we all have not only seen played out a million times, but have, more often than not, gone through ourselves.

An Education is the latest example of the genre and while it is a classic coming-of-age story, its approach is neither new nor intriguing. But what it lacks in approach is made up for in delivery. An Education is a deceptively simple movie with a complex character at its core. If you have not yet heard of newcomer Carey Mulligan’s performance, as Oscar nominations come closer, you will. Buzz is becoming louder and louder about this 24 year-old’s performance as Jenny, a London school girl in 1961 whose dreams of Oxford get sidetracked by a friendship with an older man, played by Peter Sarsgaard. I have to say that there isn’t much that is new here and the lessons learned come across at times more like an afterschool special than a Sony Classics picture, but what elevates this film from below-average to something interesting is the performance of Mulligan, who, throughout the film, is thoroughly grounded. Screenwriter Nick Hornby, who is not known for over-sentimentality, gives Mulligan great opportunities to just be instead of to act and throughout the film, except for one scene—probably the one that will get her nominated—there are no scenes that are big and over-the-top. Instead, this is a performance steeped in quietness, in reality, in a wonderment, a questioning, and an awkward confidence—all the elements that make it something you rarely see in a film about teenagers: believable.

There are other elements to this film, of course. It is set in London in the early sixties, so the setting is crucial, as the city not only serves to establish time and place, but also acts in another way altogether, as another one of Jenny’s seducers. The costumes are stylish and all of the acting is exceptional, although I have to admit I was expecting a bit more from Sarsgaard, an actor who I have always respected. He does seem to be playing off Mulligan far too much, letting her drive every scene, which may have been the way it was directed, but it left me wanting more from an actor who I know can hold his own with anyone.

Perhaps this was just too strange a mix, from a screenwriter known for comic forays into the relationship dynamics of men and women (High Fidelity, Fever Pitch) to a Danish director, Lone Scherfig, who had never directed an English-language film before. Maybe this serious film about a girl’s lessons in the real world just got lost in the translation. For some reason, this film just never resonated with me and despite some moments of relevance, all it truly has to recommend it is Mulligan’s performance. It shouldn’t be called An Education, it should be called A Revelation. Welcome to Hollywood, Carey. See you at the Oscars.