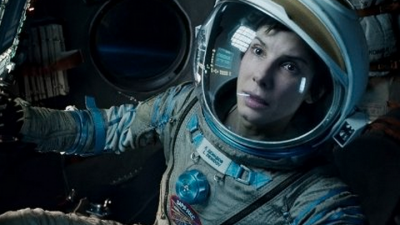 There aren’t many movies that leave me speechless. Or breathless. In fact, Alfonso Cuarón’s new film, Gravity, felt like it sucked every vital organ out of my body for 90 minutes, except for my eyes and ears—the only ones it needed—and those it held in glorious captivity throughout one of the most compelling, if not the most visually stunning cinematic experiences I’ve had.

The basics: Gravity is set in space and stars Sandra Bullock and George Clooney, who play two astronauts who must try to survive an accident that destroys their space station while they are literally floating in space, orbiting Earth. I myself was dubious as to how a full-length movie was going to sustain on a premise of floating in space (I mean, what else is there to do, really, out there), but every doubt I had evaporated from the first moment. To say this film is an immersive experience is to understate its power, its beauty and its transcendence. Do not be concerned with what it’s about or whether you might be bored by it or whether it might be too scary or how it’s been marketed. None of that matters.

What matters is everything between the credits. Everything that is the experience of this film.

It may be a space movie, it may not have the strongest story or the most riveting (if much at all) dialogue, or character development, but what Gravity lacks in traditional narrative elements, it more than makes up for in the most fluidly arresting visual storytelling I’ve ever seen on screen. I can’t remember the last time I was so absorbed by a film as I was by this one. The visual effects are so affecting, they just may make you gasp more than once and will certainly make your jaw drop. The details of the technical achievements don’t matter (although they are absolutely astounding), what matters is the end result and the result, for me, was and always is the experience. I love movies because of movies like Gravity. I love being drawn into another world (or, in this case, the world above our own), and living there—and believing it—for two hours, absorbed, captivated and emotionally entwined with it and the characters. And I’ll tell you another thing…I certainly don’t mind being in sheer awe of what I’m seeing either.

If you love movies, see Gravity. If you crave transcendent experiences that just may give you a whole new perspective on art, cinema, technology, humankind and our place in the universe, run to the nearest theatre that has the largest screen and the best sound system, wait for the next showing and just….breathe.