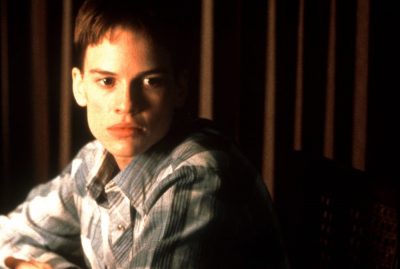 I have seen the female film performance of the year. I know it’s only November, and many more Oscar contenders are coming, but I am now laying down the gauntlet. I defy anyone to show me a more powerful, more courageous, more convincing and more haunting a performance this year than Hilary Swank’s breakthrough performance in Boys Don’t Cry. Hilary who? Hilary Swank, best known as……well, a recurring role on the television series Beverly Hills, 90210 and as actor Chad Lowe’s wife. But remember the name now because it will take on a whole new significance after you see this film. And so will her career with the Oscar nomination she should garner with it. Streep, Sarandon, Bening…..look out.

They say true stories make the best stories. Some true stories are so unbelievable that if someone thought it up in their head and wrote it out, nobody would ever buy it. Such is the case with Boys Don’t Cry, a true story. I will offer a disclaimer at this point that if you are one of those people who don’t like to know what a film is about or what happens, stop reading now. While I don’t usually reveal such important plot points in my reviews, I do feel that, as an audience member preparing to watch this film, the more you know about what’s going to happen, the easier it will be. The more prepared you are, the less shattered you’ll be. At least that’s my opinion. I knew what was coming and I was still shattered. I can’t imagine the effect if I hadn’t known.

Boys Don’t Cry is not an easy film to watch. And despite its marvels and artistry, Hilary Swank’s performance is not easy to watch. It would almost be easier if she weren’t so good.

Boys Don’t Cry is the true story of Teena Brandon, a Nebraska teenager who, in 1993, chose to pass herself off as a boy, and renamed herself Brandon Teena, and lived as a boy until “she” was discovered, raped and murdered by her “friends.” These are the facts, but there is so much more behind the story and behind the person that was Brandon Teena. There are so many elements to this story, one that captured the attention of the entire country when the murder occurred in America’s heartland.

What do you do if you feel you are in the wrong body? What do you do if you know that if you reveal your true desires that your friends and family would cast you out? What do you do if you have no support system, no money and no role models? Many gay teenagers run, many commit suicide, but most suffer in silence until one of the elements falls into place and they feel safe enough to come out. Or they never come out at all. Teena Brandon didn’t have options. A rebel her whole life, she lived a life rife with confusion and instability. But the spirit within her never died. There was one thing on earth that she knew for certain: she loved women. So, in her child-like innocence that transcended all she ever did, she did the simple thing: pretended to be a boy. And as soon as she did, she found herself. But, unfortunately, childlike innocence does not survive in this world, in this society. This harsh, cruel world cannot distinguish good intentions when they’re dressed up as deceit. So the harsh world Teena Brandon lived in finally caught up with Brandon Teena and murdered the body, but the spirit lives on in this powerful film by first-time director and co-writer Kimberly Peirce.

Diane Keaton wanted to make a film about the life of Brandon/Teena and put Drew Barrymore in the lead role. What makes Boys Don’t Cry work is the fact that Hilary Swank is not a big star. Because she’s not a big star, she had nothing to lose. And that freedom as an actor shines through in this breakthrough role. Swank captures Brandon/Teena’s spirit and energy and every person in the audience, male, female, straight or gay, falls in love with this lost soul whose charm cuts through all boundaries of gender and sexual identity. Swank’s fearlessness is pure joy to watch and her believability will stun you. Not only does she pull off the challenge of passing as a boy, but she is able to keep in touch with the woman inside and the spirit that feels caught between the two. The real Teena spent her last years trying to stuff down the woman inside and discover the man that she always felt was trapped inside. But the strength she found in discovering her new identity was matched by her weakness in her desire for women, particularly the love of her life, Lana, played well by Chloe Sevigny. Swank’s ability to find these varying levels of angst and happiness within the character is truly amazing. For someone whose life seemed so hard and against whom all the cards seemed stacked, Teena/Brandon’s optimism and love of life shone through. This is the kind of performance awards were made for.

It seems to be the year for women to break out of the soft and fluffy roles they’re used to being put in by the Hollywood establishment. Swift on the heels of Boys Don’t Cry comes Milla Jovovich in the anticipated film The Messenger: The Story of Joan of Arc, another gender-bending role where an actress gets to push the envelope beyond the accepted limitations. There are no easy-going Gwyneth Paltrow-playing-Romeo in these films. Swank and Jovovich are blazing new and hopefully rewarding paths for modern-day actresses and it’s about time.

In Boys Don’t Cry, Hilary Swank will steal your heart and then the honest brutality of our pigeon-holing society will break it, but the agony is well worth the two hours you will spend stepping into the shoes of someone who didn’t have the good fortune you do of knowing who they are and where they fit in this world. Teena Brandon paid the price for living without fear. What can we do? We can watch the film and look into ourselves and find the part of us that we see in her. And we’ll see that the desire to fit in is not such a foreign concept.

My rating: **** Worth paying full price