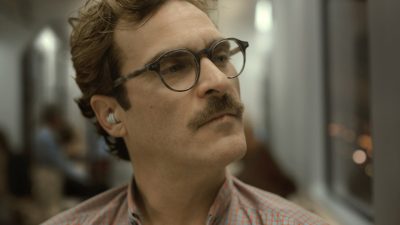 Does anyone remember the movie The Net, from 1995? It was a movie that starred Sandra Bullock about a woman whose identity was stolen and entire life erased and changed by bad guys on computers. I don’t think the movie did very well because nobody took it seriously—you can’t have all your information live inside a computer, that’s not realistic! Who knew then how far ahead of its time The Net really was. Technology is moving so fast now that I wouldn’t be surprised if the world of The Matrix turned out to be true someday.

There have been many movies about technology and how it impacts our lives, for better or worse, and the most recent of these is writer/director Spike Jonze’s latest effort, Her. In the simplest terms, Her is set in the not-too-distant future and is about Theodore, played by Joaquin Phoenix, who falls in love with the voice of his operating system. The OS, voiced by Scarlett Johansson, is intuitive and is designed to “evolve” and respond and adapt to the user, making for a personal-seeming relationship, which allows Theodore, who is lonely and trying to get over a recent painful divorce, to make an emotional attachment that he has been reluctant and unable to make since his breakup. The OS, named Samantha, is everything Theodore could want: helping him to organize his life, a good listener, making him laugh, and genuinely interested in everything he has to say. When he freely admits that he’s fallen in love with his OS to a friend, the news is not greeted with shock and a trip to the looney bin, but, rather, an invitation to a double date, because, after all, this is the future, where falling in love with our operating systems seems to be the norm.

Which is what I love about the world Jonze creates in Her. This world is a completely non-threatening, non-judgmental, seemingly idyllic but somehow whitewashed and antiseptic universe where there seems to be no conflict because there doesn’t seem to be any eye contact. Her is not a movie about online dating or even about technology, it’s a movie about who we are and what we are and how that might not change, no matter how much the world might change around us. But it’s also a warning. All those people you see walking around with their heads down, looking at their phones instead of looking where they’re going? All those couples you see in restaurants, looking at their phones instead of talking to each other? All those kids who are getting obese because they are inside playing video games instead of outside playing with their friends? These should be warnings to us that we are cutting ourselves off from what makes us a society, from what makes us intrinsically human—the human connection. Perhaps the biggest thing Her is saying is that for all the benefits we get from technology—and there are many—we must not get sucked into letting technology cut us off completely from the parts of us that make us human, the things that technology cannot ever fully replicate: emotion, physical connection, humanity.

Wow, who would’ve thought the guy who once made music videos for the Beastie Boys would wind up making one of the most deeply sensitive and emotionally moving movies of the year?

And then there’s the way Her looks. The style of this movie, with its hues and pastels and soothing voices, is almost hypnotic. Every shot is framed with a simplistic, futuristic vibe, a perfect combination of whimsy and fantasy, blended with tech and practicality. Lines and light are present everywhere, his shots are so beautifully chosen he made this a world I wanted to be in. And yet, there’s an unhappiness that seeps in from the disconnectedness that is everywhere. While not necessarily a bleak vision of the future, it is nonetheless a curious vision, one with high-waisted pants and lots and lots of shoulder bags.

As for the performances, Joaquin Phoenix delivers his most “normal” performance perhaps of his career, and he is tender, touching and heartwarming as a man who is clearly searching for something he doesn’t even know. It’s a far, far stretch from his manic and brazen performance last year in The Master, but Phoenix here shows his range by reining it in and showing a soft touch, as acting against a voice is not as easy as you might think. As for the voice, Scarlett Johanssen is the perfect choice as the voice of Samantha, as her soothing, soft tone is just as seductive to us as it is to Theodore. Amy Adams should win the chameleon-of-the-year award for playing two of the most opposite characters in two movies released at the same time: the sexy con artist kitten in American Hustle and the dowdy yet grounded neighbor in Her. I challenge you to find another actor deliver two more different performances this year.

Go see Her for the unique movie experience it is. Go see Her for the commentary it makes about our times and our society. Go see Her for what it may say philosophically about humanity and how we find ways to connect with each other. Go see Her for the performances. Mostly, go see Her because you just might figure out all the reasons this is a great movie from a fresh, unique voice—and man, that is just a great thing, right here and now.