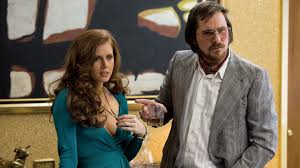 I’ll be honest, I’m not a big David O. Russell fan. I didn’t hate or love Three Kings or The Fighter, but I didn’t get the popularity of Silver Linings Playbook either and I absolutely despised I Heart Huckabees. I think that Russell makes movies that are performance and style-driven—not that there’s anything wrong with that—which tend to make them actor-heavy and story-light. I find he’s a director who’s very aware and conscious of his own voice and his ego doesn’t allow him to make any movie in a quiet way. You know how Tom Cruise has to run in every movie he’s in? I feel like a David O. Russell movie has to have a hyperactivity to it in that same way, almost like a signature—or an insecurity. Silver Linings Playbook’s dialogue was so rat-a-tat I felt like I was watching it in fast-forward. So I was prepared for his new movie, American Hustle, to be bombastic, especially when I learned the subject matter was the world of New Jersey con artists and was loosely based on the true story of the ‘70s Abscam scandal.

Much to my delight, American Hustle has far more texture than the somewhat shallow and simple Silver Linings Playbook did. It is a stylistic feast, swooshing across the screen with costumes and hair and music (by Danny Elfman) and has a directorial touch that is nearly—dare I say it—subtle and even intimate at times. But going big is what Russell does best, and it’s when he goes big that this movie soars, in the big party scenes, confrontation scenes, sequences where you really soak in the atmosphere of the time and place and allow the style of this movie to spill over you. What makes American Hustle so rich, besides the acting performances, which I’ll get to in a second, is the atmosphere, created in the details of the costumes, the set decorations, the cars, the background, everything that puts you right there, right then. This is a movie about a place and time in America, a particular moment in our history that is as much a character in the movie as any person and Russell does a perfect job of putting us right there.

But, as always, what Russell does best is casting. It seems that he has learned pretty quickly the secret to becoming an elite director is to make movies that Oscar-caliber actors want to be in. And, to do that, you give actors parts that they can shine in. He lined up a pretty invincible cast for American Hustle, one with a cumulative 10 nominations and two wins between them. Let’s just call that a pretty impressive buffer zone. Have you ever noticed how a great performance can sometimes make you forget an average script? Yeah…I think Russell counts on that. It’s hard not to look good when you’ve got Christian Bale, Jennifer Lawrence, Amy Adams, Bradley Cooper and Jeremy Renner on your side.

And guess what…it works. The performances, with the exception of Cooper, are absolutely fantastic. The best of the bunch are Bale and Adams as the pair of con artists who are enlisted by Cooper’s FBI agent to bring down corrupt politicians. Bale is absolutely magnificent in one of his most underplayed performances as a con man who may actually have the most legit moral compass of all. Nobody surprised me more, however, than Amy Adams, who jumps off the screen in every scene, combining sex appeal with vicious determination. Jennifer Lawrence, in a stunning supporting role, also turns in a bravura and heartbreaking performance, reminiscent of Sharon Stone’s scene-stealing role in Martin Scorsese’s Casino.

Which brings me to my biggest issue with American Hustle. It’s impossible to watch American Hustle and not sense the similarities to Scorsese’s Goodfellas. There are so many parts of the movie, for me at least, that felt so ripped off from Goodfellas that I almost laughed out loud. Is there a difference between homage and ripoff? I guess that’s a matter of perspective, but when a movie is as iconic as Goodfellas is, it feels lazy. You can have style, just don’t have someone else’s.

The bottom line is, I’ve just always felt there was an insincerity in Russell’s movies, a certain sleaziness that inhabits his aesthetic that I can’t seem to shake, whether it be real or imagined. This inauthenticity may lend itself to the subject matter in American Hustle, but it still doesn’t lend itself to the believability of the storytelling or of the characters and it still comes through, particularly in Bradley Cooper’s performance, which is so painfully forced that it does nothing but remind me that Russell is behind the scenes, even if I’ve momentarily forgotten during the few delightfully intimate moments that work, largely due to the exquisite work turned in by Bale and Adams.

In the end, American Hustle was a real push-pull experience for me. I loved the moments of stylish filmmaking, the music, the clothes, especially the performances, but it was just missing that element that would allow me to connect emotionally with it, which left me feeling empty. I wish I could say I was surprised.