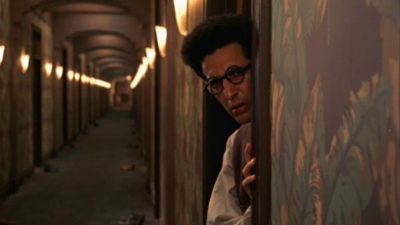 Barton Fink is the newest brilliant endeavor from the same dynamic duo who brought us Blood Simple, Raising Arizona and last year’s Miller’s Crossing. Joel and Ethan Coen co-wrote this film, which stars John Turturro (Do the Right Thing, Miller’s Crossing) and John Goodman (King Ralph, television’s Roseanne) in a surreal tale about a successful New York playwright who heads out to Los Angeles in the 1940s in an attempt to be a successful screenwriter.

We first see the quirky Barton entranced by a performance of his own Broadway play, and from then on he monopolizes both the screen and the story. We are immediately drawn into Barton’s world, a world obsessed with the plight of the common man, and we are magnetically glued to the expressionless face that director Joel Coen photographs at every angle.

Turturro’s performance as the Kafkaesque character of Barton is both stirring and hypnotic, displaying an angst that bubbles slightly on the surface so that we never really know what Barton’s thinking or feeling.

Effective use of sweat and fire, Coen trademarks, plus mesmerizing camera angles characterize Coen’s direction. But perhaps what the Coen brothers do best is capture the surreal qualities that inhabit the most ordinary man, the most ordinary life.

All of the Coen’s films are about “regular” people who seem to live irregular lives. They draw characters as caricatures with a freakish edge to them that often slices the lines between reality and the surreal, which, of course, is their statement on reality itself. Barton Fink is no different.

John Goodman, the hidden treasure in this film, plays a regular guy with a very irregular dark side. If you only know Goodman from his role on the television sitcom Roseanne, see this film and recognize him for the powerful film actor he has become. Just when Barton thinks he has stumbled upon the ideal “common man,” Goodman turns out to be anything but that–an insurance salesman with a dark side equaling Hitler’s.

Commenting on the darkness that inhabits all of us, especially the most “ordinary” of us, is merely the subplot of this psychological mind-bender of a movie. If the depth and complexities of the maze of the human mind and the darkness of the human heart aren’t enough, the Coen brothers have sculpted a film that takes the viewer on a journey that only reaches its destination in the final scene. The ending of this film has caused quite a stir among critics and audiences, baffling most who come out of the theater.

The brilliance of the film, far from its technical superiority and the award-worthy acting, comes from the screnplay. This story is a gradual unraveling of reality, a slow march towards an explosive ending that excites the senses.

This man’s life certainly is not a roller coaster ride, but the power of Barton Fink lies in the slow and steady pace it takes towards ultimate destruction and ultimate creation at the same moment. Creation comes out of destruction, reality becomes surreal and ordinary becomes extraordinary. A world that seems completely unreal to Barton, seems to have the most answers.

This film is the first ever to sweep the thre top awards at the prestigious Cannes Film Festival: Best Film, Best Actor for John Turturro, and Best Direction for Joel Coen.

Newsweek’s David Ansen called Barton Fink “savagely original” and most of the critics hail this film as an instant classic. I can’t disagree. The photography is subtle yet stunning, and the soundtrack creates and enhances the dark and bizarre atmosphere that is the world of Barton Fink. For those of you who are into imagery and metaphors, you will be thoroughly entertained.

This is not a film for those who don’t like to be intellectually challenged. This is for film fans who admire detailed work and look forward to quality. Go in as an empty sponge and come out with enough to chew on to sustain a conversation for at least three days.

Be prepared for a textured, layered, symbolically relevatn film about the surrealness of life and the common man that struggles inside all of us, as well as the dark side that could just as easily swallow us.

If you do go see this movie, the only hints I will give you are to expect nothing and be open to whatever is given to you. There is a method to the madness, I promise you. Evaluate for yourself what the ending means. But do see it. If you only see one movie this year, let it be Barton Fink. It’s that good.