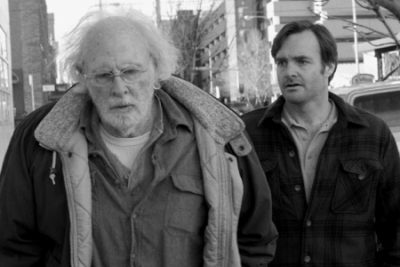 They say you should write about what you know. My favorite Alexander Payne movie (so far) is 1999’s Election, which is set in writer/director Payne’s hometown of Omaha, Nebraska. His presentation of the characters in that movie is very similar to the way the Coen brothers present the characters in one of their most personal and unquestioned best films, Fargo, which happens to be set not too far from where the Coens grew up in Minnesota. These films are love letters, of a sort, from filmmakers who appreciate where they come from and recognize both the humor and the character in their roots.

Payne gets even more personal with his current film, Nebraska, about Woody, played by Bruce Dern, an elderly Montana man who, believing he has won a sweepstakes prize, is determined to get to Omaha, Nebraska to claim his million-dollar prize, even though he can’t drive and his wife thinks he’s crazy. After he is found wandering off several times, Woody’s son, David, played by Will Forte, reluctantly agrees to drive him from Montana to Nebraska, even though he knows it’s a wild goose chase. The heart of the film is found when Woody and David make a pit stop along the way in Woody’s Nebraska hometown. Here, we learn the definition of “small town,” as word travels quickly that Woody’s back and that he might soon be a millionaire. Past relationships come to light, dynamics are played out, entire histories are brought to bear—it’s fascinating to see how the potential of a change in fortune can change a lifetime of truths.

This is what is so vivid about Nebraska and about the character of Woody, played with a quiet stoicism by Dern: not much seems to affect him. The world is swirling around him, but he is resolute about just one thing: getting to Omaha to get his money. That’s it. I’ll be honest, what makes this movie interesting is everything and everyone in this movie except Woody. He’s, for me, the least interesting character here. But maybe that’s just the point. He is grounded and focused while everyone else around him is fleeting and lost. Is he really the crazy one? No, that would be too easy.

Nebraska is about so much more than crazy/sane or lost/found. It’s about coming home and the things that change us and, more important, the things that don’t change us. And, most obvious of all, it’s about a father and a son, who never knew each other until they were forced to. Dern’s performance is fine, but for me, the true revelation here is in discovering that Forte, one of my favorite comedians, has real dramatic chops. Good for Payne for giving him a chance and he really comes through and holds his own in a significant role. The scene stealer here is June Squibb, who plays Woody’s foul-mouthed and saucy wife Kate, who is an absolute hoot.

There are many great moments in Nebraska, but it lets down in the end as it never quite lives up to its promise. But just as I loved seeing Fargo through the Coen brothers eyes, I loved seeing Nebraska through Payne’s. May the love letters keep coming.