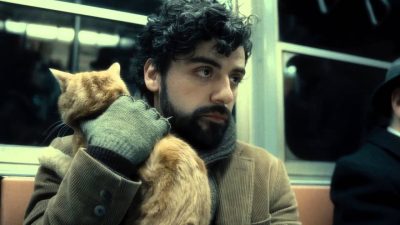 Writer/directors Joel and Ethan Coen have always made films in different genres, to varying degrees of success, so it should be no surprise that they would try their hand at a New York, Bohemian movie, set in the sixties, about a folk singer. Sort of a Girls-meets-Woody Allen-meets-Bob Dylan-meets the Coen brothers movie, set in 1961, with a T. Bone Burnett soundtrack and an orange tabby cat as a costar.

Yup, sounds pretty Coen-y, but, sadly, it’s not even close to being Coen-y enough. The Coens give us dribs and drabs of a lot of different things in Inside Llewyn Davis, but don’t give us enough of any one thing to satisfy the need for wholeness or to even provide the bizarrely compelling experience which has made the Coens my favorite filmmakers over the years. For whatever flaws they may have, their films have never failed to entertain. Which makes Inside Llewyn Davis all the more confounding, not just in its seeming lack of effort, but in its near total lack of enthusiasm.

The premise is promising enough: Oscar Isaac plays Llewyn Davis, a struggling Greenwich Village folk singer who is trying to eke out a living working the clubs, while juggling his angry ex-girlfriend, incompetent manager and the nightly search for a sofa to crash on. At the beginning, we are eager to see the roots of his transitory existence, the reason for his ex’s vitriol, and root for him on his journey to professional success, since he obviously is an artist with integrity, right? He won’t sell out—he’s true to his art and what he believes in. They’ll show us all of this, right?

Instead of a journey of artistic expression, what we get is a literal journey cross-country that goes nowhere, much like this movie. We get no insight into who Llewyn is, why people react to him the way they do—with such disdain—and, more important, no insight into where his inspiration and love for music come from.

While there are moments in the movie that are worthwhile, particularly the musical numbers, which are really good, I was unexpectedly let down by the pointlessness, emptiness and half-heartedness of it all that, up until now, had been foreign to me in a Coen film. I was perfectly willing to chalk this one up to a simple case of a missed opportunity until I noticed the fact that the critics seemed to be falling all over themselves to praise it, confounding me even further. Was I missing something? So, after taking a brief, unscientific poll of top critics, I noticed that, according to them, the brilliance of Inside Llewyn Davis is rooted in all the subtext, hidden meanings, metaphor and allegory that are sprinkled throughout the film—all you have to do is properly seek them out and intelligently interpret them. Well, there you go. I made the mistake of just watching the movie.

I’m going to vent here a little bit because, well, I can. I heard so many people complain that they didn’t think Gravity was worth all the praise because it didn’t have enough of a story. It was all bells and whistles with no substance, they said. Well, now comes a film that has no bells and whistles but it also has no story and it’s up to the audience to interpret any actual meaning—and that’s a better movie? Well, guess what? You can’t have it both ways.

What do I want in a movie? Yes, I want to be entertained, yes I want to be told a story, and no, I don’t mind subtext and hidden meanings and being challenged (Barton Fink is one of my all-time favorite movies, so don’t tell me I can’t handle Coen subtext when they do it well), but you’ve still got to take me somewhere. Just last night I watched a documentary on Stephen Sondheim, and he related the most important thing he’s learned about writing a story: you’ve got to end up somewhere different than where you started. Bingo. Otherwise, really, what’s the point? And if I’m going to spend my hard-earned money to sit and experience it, why else would I bother?

And that’s the problem with Inside Llewyn Davis. You end up exactly where you began. It felt like the experience just didn’t matter. Maybe my standards were too high, that’s entirely possible. But the sad truth for me is that I was bored. I was uninterested in the characters and I honestly couldn’t have cared less about a single thing that was happening on screen with the exception of the cat, who truly steals the movie (making the second year in a row an orange cat should snag a supporting Oscar nomination—after Life of Pi last year). No amount of subtext or literary references can make you care about a character or add dimension to a story. It’s hard to interpret fog.

If I seem unduly passionate about this, it’s because I feel both let down by my favorite filmmakers and annoyed by the pretentious critics who feel they need to somehow impress their readers with their literary knowledge, appropriate or not. And having the gall to insinuate that if you didn’t like the movie it’s because you didn’t work hard enough or weren’t smart enough to “get it” is infuriating and insulting. For me, Inside Llewyn Davis is just a simple case of an experiment gone wrong—storytellers who lost their way, hopefully temporarily. It does happen. If others “got it” and I didn’t, so be it. I’ve heard their next movie will be a sword-and-sandal drama. Let’s hope they do gladiators a little more justice than they do folk singers. And let’s hope I’m over it by then.