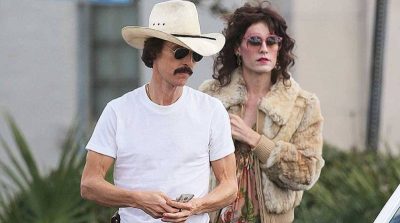 It is way too easy for me to forget that I grew up during the time of a plague. The ‘80s shaped who I am, after all, I was age 10 to 20 during the ‘80s, so it’s understandable that my biggest—and longest lasting—personal influences were from that decade. The music of the era is still with me today (much to the gleeful torment of my friends), the films are still some of my favorites, and the events of the decade are still emblazoned on my memory, especially those involving the end of the Cold War (no doubt the fact that I lived behind the Wall in West Berlin from 1980 to 1984 would prompt my great interest in all circumstances that led to its crumbling demise in 1989).

But, through it all—MTV and Glasnost and Reagan and Cabbage Patch Kids and Duran Duran—there was another “event” of the decade that never directly touched me, and yet, it is—and should be—the defining snapshot of the time but it is too easily forgotten even by those of us that lived through it: AIDS.

To this day I am horrified by my ignorance back then of the magnitude of the crisis. The information I remember having at the time I now know to be completely false. How does this happen in the 20th century? How does a plague rip through a first-world, economic power and nothing but misinformation, apathy and bigotry follow? I see now that I was a willing consumer to the lies we were being fed. I wonder if this is how it was during World War II. What was the rest of the world being told about what was going on in those “work camps?” I know, I sound like an anti-government wacko right now, which is exactly what I’m not, but what happened during the AIDS crisis in the ‘80s, when thousands of lives were lost due to misinformation and, let’s face it, bigotry—it makes you angry. No matter what side of the aisle you sit on, nothing should ever be accepted blindly. This should be the lesson of the AIDS crisis of the ‘80s. And this is the power of the new film Dallas Buyers Club.

Dallas Buyers Club, directed by Jean-Marc Valee (The Young Victoria) and written by Craig Borten and Melisa Wallack, set in Dallas in 1985, is based on the true story of Texas good ‘ol boy Ron Woodruff, a man whose multitude of overindulgent hobbies include gambling, drugs, and unprotected sex with prostitutes. When an accident on the job prompts a visit to the hospital, Woodruff’s blood test comes back HIV positive. He is so far along with full-blown AIDS, in fact, that he’s given only 30 days to live. Neither piece of news sits well with Woodruff, an arrogant, vibrant, full of life, homophobic bastard who refuses to accept that anything could knock him down, let alone a “gay disease” (I will soften my verbiage here, but you get the drift). It is the early days of the disease still, and not much is known, so he sets about to learn more about the illness and how to fight it. What he learns, pretty quickly, is that the government—namely the FDA—seems to be in bed with the giant pharmaceutical companies and they together believe this magical drug called AZT is the one and only “cure,” but they and only they will decide who will get it and when. Woodruff, being at the bottom of that list, manages to get his hands on some on his own, and when his supply runs out, he slips down to Mexico to get more. However, a doctor in Mexico convinces him that AZT is actually the enemy to getting healthy and turns him onto a cocktail of protein and vitamin pills, which, after a few weeks, actually make him feel better.

Emboldened by the fact that he’s still breathing, long after his original death sentence has come and gone, Woodruff realizes there’s a goldmine to be had if he can figure out how to get these protein and vitamin pills back to the States to treat the thousands of AIDS sufferers who are unable to get their hands on them because the FDA (and their pharmaceutical brethren) have made sure to not approve them because they are pushing AZT, which, as it turns out, is actually making people sicker.

Dallas Buyers Club does tell an interesting side to a story that not many people know. It’s important to remember all the misinformation that was out there and that usually is out there at the beginning of any crisis like this. There will always be people out to make a profit off those in need, but what makes Ron Woodruff’s story fascinating is his blend of self-interest and greed combined with a genuine desire for seeking out and spreading the truth. It also doesn’t hurt that he’s a character you half the time want to stand up and cheer for and the other half want to punch in the face. Black-and-white can be so boring.

What also can be boring is a movie that never rises above average docu-drama material, which Dallas Buyers Club sadly never does. Too many elements and details are trite and predictable and too many peripheral performances one dimensional. However, Dallas Buyers Club will linger far beyond its expected shelf life due to the quality of two performances, which elevate this film far beyond its movie-of-the-week pay grade: Matthew McConaughey and Jared Leto.

Much has been made of McConaughey’s weight loss for the part of Ron Woodruff and it’s deserved. Your mouth will drop during much of this film when you see his gaunt figure and his commitment to this character, but this performance is so much more than physical. McConaughey is from Texas and you can tell that he understands this character, he inhabits him and allows him to come through in tiny moments that are believable and relatable. He doesn’t do too much and there are no over-“actory” moments, it’s just a performance that is completely engaging, powerful, committed, raw and authentic, which is rare for an actor that I’m used to seeing hamming it up and overreaching. This is most definitely the role and performance of McConaughey’s career.

As for Jared Leto, this small but wow-some performance is the perfect counterpoint to McConaughey’s tough and confident cowboy. Leto plays Rayon, a transgender AIDS patient Woodruff meets in the hospital, whom Woodruff sees as an entry to the gay community to market his pills. But Rayon is more than just a serviceable role in the hands of Leto, an actor who has made more of a living in recent years as the lead singer of the alternative rock band Thirty Seconds to Mars than he has as an actor. Perhaps it’s this enigmatic, chart-your-own-course vibe that Leto has (his last film was four years ago), but his portrayal of this character is completely naked and free of artifice, it’s as if he’s not even trying to be good—which may explain why the performance feels so freshly brilliant. Again, his contrast to McConaughey’s gruff, aggressive, all-out win-or-die-trying style is a casual, quiet and calming sensitivity. It’s a heartbreaking reality check to what the disease is and what even, in a less obvious way, bigotry is. It is a moving and worthwhile performance—one that I hope Oscar won’t forget.

Overall, Dallas Buyers Club is a basic movie that tells an important story filled with mostly one-dimensional characters (Denis O’Hare and Jennifer Garner, wherefore art thou?), but the stellar, moving and heartbreaking performances from Matthew McConaughey and Jared Leto propel this movie from the wait-for-Netflix list right to the top of your must-see list. Don’t let this one pass you by. If history has taught us anything, it’s that we need to pay attention, especially to the little things.