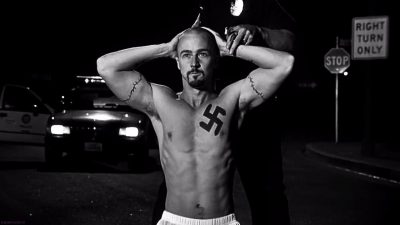 Tired of fluff? Do you want to be challenged by a film? Are you tired of seeing society through films like American Beauty, which portray it in a metaphor and abstract concepts instead of concrete issues? It’s not easy, but American History X will cure you of these ills.

I have always encouraged films that make you think, no matter their quality. Thelma and Louise made the cover of TIME Magazine because that film got the country talking. Fatal Attraction did the same thing. So did JFK. Each of these films, much like American Beauty, addressed societal issues, and forced each of us to face something about our place in this community that is America. American History X didn’t get the same exposure or attention these films did, but it deserves to be seen, and that’s why video is such a wonderful thing. There are so many films that died in theatres that can be discovered on video. Rushmore was one, and now I am recommending American History X.

Even though you didn’t see it in the theatres and you don’t remember much about it, the film does ring a bell for you. That’s because Edward Norton was nominated for Best Actor in 1998 for his role in American History X. The film was lauded by critics and this nomination for Norton was considered a nod to those critics, much as Sean Penn’s performance last year in Sweet and Lowdown was recognized, another small film that was ignored at the box office but embraced by critics.

American History X is full of raw language and punishing ideas. It reaches down into the depths of our society and brings to the surface things we all pretend aren’t there. It reminds us of people we wish weren’t in society, of ideas we know people have but pretend they don’t, and portrays things that hit just a little too close to home. It’s a film many of you may not want to watch because it may be a little too real. The issues in this film are real and they are there, behind the walls of that house down the street from you, in the schools, in our government buildings, everywhere. We need to recognize them and we need to talk about them. Hollywood has that power and it is used to the utmost benefit in this story.

Edward Norton plays a Neo-Nazi skinhead in modern America. We are taken on a journey of his beliefs, his actions, and his rage. American History X is a story of one man’s journey to find himself. It is also the story of a family and how hatred can engulf and how rage can destroy. Yet, in the end, there is discovery, there is enlightenment, and there is peace. How these come to be is never easy and this film doesn’t make it easy either.

It’s easy to exist in our lives without worrying about the “fringe” element that we know live in Montana or show up on the Geraldo show. It’s quite another to realize that hatred and rage is in our back yard. It’s time to be looking at it. It’s time to look at ourselves. Issues and ideas are not weapons. The ideas put forth in American History X should not be condemned or dismissed. If our society is to survive and continue to thrive, those ideas must be seen for all that they are and all that they mean.

Rent American History X and see what value there is in a Hollywood story that forces you to see what you have spent your life turning a blind eye to. And I hope we all start talking.