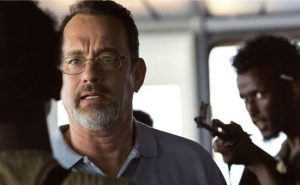 Would you watch a football game if you already knew the final score? I mean, there’d be no drama, right? When it comes to film, it’s an interesting proposition, asking an audience to sit down to watch a movie for the first time if they already know the ending—you wonder how involved they could really get. I imagine it would be challenging. Director Paul Greengrass, however, has already undertaken that challenge once, with his first movie, United 93. And now he’s chosen to make a second movie based on a well-publicized international incident—this time it’s Captain Phillips, based on the pirate attack and subsequent kidnapping of Captain Richard Phillips of the American cargo ship Maersk Alabama off the coast of Somalia in 2009. The most interesting thing for me was that, just like United 93, with the suspense of the ending stripped away, I found myself watching Captain Phillips differently than I would any other movie. While I’ll admit there were moments I found myself distracted because I was anticipating what I knew was coming next, for the most part I was still able to sit back and enjoy the ride.

So what that I knew what was going to happen. This movie is so well done, so exciting and so fast-paced, it didn’t matter. What director Greengrass lacks in emotional connection—there is little warmth in this film—he makes up for in technical prowess, and delivers a movie that comes at you with a stunning combination of high-energy movie-world action and authentic-feeling real-world gravitas. There are no bells and whistles in Greengrass movies, despite all the technology that inhabits them. From the simplest walkie-talkies to the most advanced US Navy infrared scout drones, equipment takes center stage in Captain Phillips, as everything from motorboat engines and water hoses to broken glass and ladders all play as important roles in the movie as humans do. But there are no special effects, no gimmicks and certainly no Hollywood wool pulled over our eyes. It’s about as straightforward as a movie can get.

Even so, it has substance too. It’s a movie about survival, yes, but it also touches on several other issues, including trade, protocol, communication, employment, international relations and military operation and procedure. I would almost call Captain Phillips fascinating more than exciting, probably because I am so interested in the way things work and that is, in the end, what this movie is about. And that’s what Greengrass is so good at. He shows us details—of everything. It is essential that we feel where we are for this movie to work. His style is so detail-oriented and observant, both United 93 and Captain Phillips have pseudo-documentary feels to them, even though they are both slick big-budget Hollywood productions. But his attention to detail, his obvious desire to let the events play out and speak for themselves and his seemingly relentless pursuit of authenticity separate his films from the generic Hollywood pack.

But while Greengrass may excel in the technical elements of everything that goes into a film, he knows he needs to have a human at the heart onscreen if this real-life story of capture and survival is going to connect with an audience. And who better to connect with an audience than Tom Hanks, who hits it out of the park as the simple sea captain from Vermont who comes face-to-face with Somali pirates with nothing to lose. Call him boring, call him mainstream, call him whatever you want, but you also have to call him something else: good. He’s the perfect actor for this kind of role: an Everyman who can hit all his marks, blend into the scenery when you need him to (which is most of the movie) and be able to rise up and deliver an emotional wallop every now and then to keep the audience engaged just enough. You can’t convince me anyone else could have done better here. And if you don’t think he deserves to be called a two-time Oscar winner, talk to me after the final scene of this film.

I will admit I felt a distance from everything in this movie, not sure if that’s what the filmmakers intended or not, but it still worked for me. Paul Greengrass knows how to make an exciting movie that holds you in its grip. Even at a distance, that’s quite a compliment.