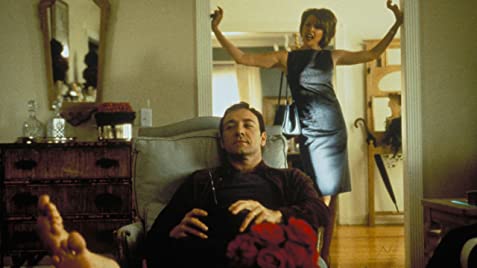 American Beauty has its strengths and it has its weaknesses. Unfortunately, its one major weakness is the lens through which I view it. That lens is the memory of another recent film, The Ice Storm. American Beauty is a more modern, more tongue-in-cheek and, mostly, more self-aware film than The Ice Storm, but it is, nonetheless, in the same genre. And since, in this reviewer’s mind, The Ice Storm is in a class by itself, American Beauty just cannot live up to its impossible standard.

A slice-of-life look at a typical American family, American Beauty reveals all the dysfunction and self-loathing that bubbles below the surface of outward normalcy in everyday American life. Kevin Spacey plays Lester Burnham, a washed-up reporter for a media magazine whose fantasy life is far richer than his real life, the one he shares with his trying-to-be-perfect real estate agent wife, Carolyn (Annette Bening) and typically moody teenage daughter Jane (Thora Birch). Together, the Burnhams are the picture of domestic misery while putting on the face of suburban bliss. When Lester decides to chuck it all and reclaim his lost adolescence before it’s too late, the carefully crafted portrait of the perfect American home comes crashing down.

Lester’s pursuit of self-fulfillment comes at several high prices, and affects everyone around him. This tale of suburban American angst is oftentimes clever and funny, and bleak and disturbing. Spacey is, as usual, excellent in the role of the suddenly-alive man traveling through a most unusual mid-life crisis. The acting is uniformly strong, from Bening playing a woman who is barely holding onto her cherished comfortable life, to Birch, who plays the sullen and unhappy teenager to perfection. A real treat in this film is Wes Bentley, who plays next-door neighbor Rickey Fitts, who introduces Lester and Jane to worlds neither allowed themselves to discover on their own.

American Beauty is being hailed in many circles as a true cinematic gem. Could it be that the movie-going public is just happy to hear a fresh voice? Both the director, Sam Mendes, and the writer, Alan Ball, make their feature-film debuts with this film, and it does show in its freshness and brash originality. Mendes, best known as a top theatrical director, directed the Tony-Award winning revival of Cabaret and Nicole Kidman’s Broadway showcase Blue Room. Ball’s previous writing credits were as a television writer for such series as Cybill and Grace Under Fire. But American Beauty is certainly their triumph, and they each show tremendous talent for the big screen.

I’m afraid though, even after all this, that I still wouldn’t be able to answer the question of whether I liked the film or not. I can tell you I admire it, I admire the acting and I admire the bravado of its delivery. It is a fresh voice from two newcomers. But, unfortunately, it is not a fresh idea. And that’s what would really be beautiful.