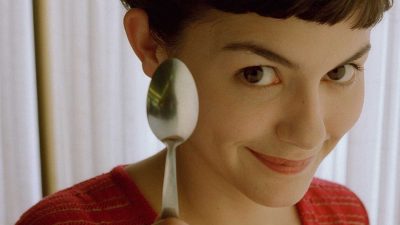 And thank goodness for a little French film called Le Fabuleux destin d’Amelie Poulain, better known to us as Amelie. I have seen other films this year and I will see the rest that Hollywood has to roll out during this Award season, but I am confident in this statement: Amelie is the best film of 2001. It’s the best thing I’ve seen, THAT I am sure of.

For the third time, I will not divulge too much plot information. But I will tell you that Amelie is a story of a French woman who wants to make a difference in other people’s lives and ends up finding love for herself. It is a charming, warm, wonderful film about one of the most unusual and enigmatic characters you will ever meet on film. Played by Audrey Tautou, Amelie is a woman who lives in her own world, until she realizes that there may be room for one more in her quiet, small life. This film also plays to our eternal hope that there is, in fact, one perfect person out there meant just for us.

The word that comes to mind the most when I think of Amelie is refreshing. There are all these ads on television hawking The Majestic as this season’s feel-good movie, the one that will temporarily erase the lurking sense of doom we all have had since September 11. Well, forget The Majestic. Go see Amelie. You will smile, you will be endeared, you will be taken in by a world and a character that will feed your soul and make you feel alive. Director Jean-Pierre Jeunet has delivered a masterpiece of light and sound, as the whole atmosphere of this film is fresh and alive. Modern Paris has never looked so lovely and has never been so charming.

There is no magical cure for what ails us, but Amelie is a good dose of medicine.