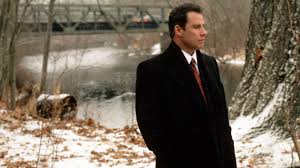 I’m spoiled. That has to be it. I’m spoiled by Hollywood and all their stupid big Hollywood endings, Hollywood plot twists, and Hollywood manipulative emotional heart-tugging. I’ve been brainwashed into believing that a movie is only as good as its super-hero endings. That’s the only conclusion I can come up with as to why I left the theatre after A Civil Action feeling really hungry and ultimately dissatisfied.

Credit writer/director Steven Zaillian for keeping it real, however. Based on a true story, A Civil Action does keep it true, or as close to true as Hollywood can come, I suppose. Starring John Travolta as a big-shot personal injury lawyer in a small firm, the film focuses on one case that takes over the life of this lawyer and of everyone in his firm. The case is that of eight families in a small New England town who take on two local companies, accusing them of poisoning the drinking water in the town, which, they believe, caused the untimely deaths of their loved ones.

Zaillian, whose film debut was Searching For Bobby Fischer, seems to be a master of subtlety. Zaillian slowly but surely draws the audience into the case, as the lawyers are drawn in. If you’re expecting dramatic witness tampering like John Grisham movies or fireworks in the courtroom like A Few Good Men, forget it. Expect reality. Cases like this cost money, and this firm nearly goes under. Cases like this aren’t glamorous, so there are no romantic elements in this film. Some cases don’t even win, although I’m really not going to give anything away, but reality does seep in and you start to wonder what will really happen.

What happens is a wonderful ride but an ultimately unfulfilling destination. They wrap it up neatly with documentary-like summations written across the screen, but it just doesn’t satisfy. It’s like eating a jelly doughnut with no jelly inside. You enjoyed it and you would’ve eaten it with or without the jelly, but the jelly REALLY would’ve been nice.

Travolta gives a great performance, as does Robert Duvall (although we don’t see nearly enough of him), and the story is captivating. The supporting performances are strong throughout, especially William H. Macy, who is always brilliant. But in the end, what makes this movie worth seeing, if you understand that there is not a pat Hollywood ending, is just that. It does not sell out to give us a nice button, because life isn’t like that. Life situations don’t come neatly packaged into a beginning, middle and an end. Instead, they unveil, sometimes quickly, sometimes slowly, and sometimes never end at all. So this film should be applauded for its honesty, not for its satisfaction value. But if you’re intrigued by the law, or if you’re a Travolta fan, you really won’t care anyway.

My rating: *** worth paying matinee price