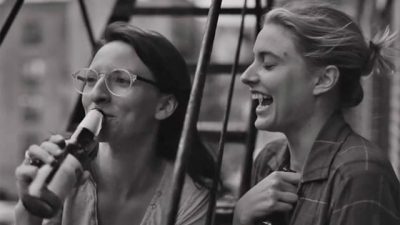 I’m 42 and I am stunned at the fact that in the 20 years since I was 22, the physical divide is far smaller than the emotional one. I always thought I would stay as idealistic and emotional and forthright and principled and ethical and moral and upstanding and courageous when I was 42 as I was when I was 22. I thought I’d fall apart physically, but I never thought I’d lose my passionate idealism as I got older. I thought my friends would last forever, that love would last forever, that my desires and dreams would last forever and the world would turn out just the way I wanted it to. No, really, I did.

So maybe this explains why Girls is so popular.

For those of us who inhaled the college experience, moving away from home—where we were under the protective umbrella of a loving, nurturing environment—and going to college—a vibrant, challenging, protective umbrella of a different type of nurturing environment that encouraged us to actually explore our individualities—blossoming adulthood was a glorious thing. We discovered who we were, who we thought we were, and who we thought we wanted to be. And, more important than that, we discovered the people who we thought we were going to be those people with.

Did you notice how easy it was to make friends when we were younger? Back before we settled into our groove, back before work exhausted us and life jaded us? Back before we coupled up and settled into a routine? Back when we took risks? Back when we still trusted strangers? This is probably why we watch Girls. The phenom HBO show has touched a lot of nerves, seemingly because of its rawness, but I think it’s because it strikes such a powerful chord with those my age: it’s just far enough away from those just-out-of-college years to be nostalgic, but close enough for it to be ever-so delicately painful. “That used to be me” or “I knew someone like her” or “why couldn’t I have been like that more” seem to be common refrains. Yes, this familiarity plays a part, I’m sure, as does the idea of catching a glimpse of today’s generation, in all their profound lost-ness, but I believe, at its heart, what Girls speaks to, in the deepest of our hearts, is the basest human element: friendship.

You know the only thing I still have in common with my 22-year-old self? My best friend.

The bonds between women are complicated, deep, powerful, dramatic and empowering and, for any woman over the age of 30, the key fabric of her emotional soul. Ask any woman who the most influential person in her life was between the age of 15 and 25 and I guarantee you she will tell you it was her best female friend. It is in these friendships that we are made, through these bonds that our trusts are built—or destroyed—and our world view often shaped. Before the romantic partnership we build our families and grow old with, it is undoubtedly the friendships in our youth that shape who we are as people.

And guess what. Hollywood knows this. Movies about female friendship may not be box office record-breakers, but they are beloved because there is always an audience. And with the popularity of Girls, we will be seeing even more.

And here’s the totally ironic thing about the new movie Frances Ha. My immediate reaction, and the reaction of everyone I saw it with, is that it is a movie totally influenced by Girls. It has the same vibe, the same atmosphere and general commentary as the Lena Dunham series. But the Noah Baumbach movie had to have been written long before Girls ever came upon the scene, and it would seem to be grossly unfair to this little gem of a movie to compare it to the HBO series.

BUT IT’S IMPOSSIBLE NOT TO!

Frances Ha feels, looks, acts and even sounds like an episode of Girls. It even stars an actor from the television show (Adam Driver). It would be funny if it weren’t so (hopefully) unintended. But, still, Frances Ha, which stars and is co-written by Greta Gerwig, is a charming and endearingly quirky movie about Frances, a charming and endearingly quirky New York dancer who has no idea what she’s doing with her life. The only thing in life that she knows without question is that she and her best friend will be best friends forever. She doesn’t seem to realize that life is hard, sometimes even cruel, which is the frustratingly endearing thing about her—or just nonsensical. Also just like her.

Frances Ha is worth every second, if only for Gerwig’s performance. More performance art than performance, her character’s naturalistic reactions are priceless. Frances is too sweet to be weird and too kooky to be cute, but she’s endlessly delightful to be around. Many have said this Noah Baumbach –directed black-and-white indie is more reminiscent of Woody Allen and the French New Wave than anything Lena Dunham has done, but, really, who cares what it reminds you of when you’re having this much fun.

And for those of you who are worried that I’m no longer idealistic or principled in my old age, I still don’t eat meat, have never (and will never) see an episode of Keeping Up With the Kardashians, and will never, ever, root for the Yankees. That will have to be good enough.