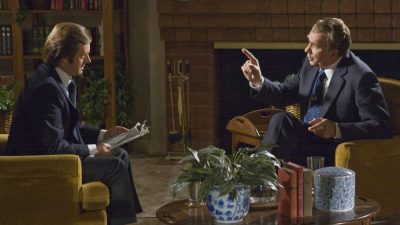 You think you know what you’re getting with Frost/Nixon. You think you’re getting the story of the famous series of interviews between British talk show host David Frost and disgraced former President Richard Nixon in 1977—and you do—but you’re not prepared for what else you get. Namely, the slow burn. Everybody in the theatre knows where the story is leading, but what makes the journey to that destination different in this film, than, say, in The Curious Case of Benjamin Button (Benjamin’s journey towards youth) is this film is actually filled with discovery. And if you’re wondering what kind of discovery, I mean every kind.

At its core, film is about reflecting human nature, in all its glories and faults, complexities and intimacies, vulnerabilities and strengths, and Frost/Nixon is a film about all of these. It is also a film about history and real events and facts and politics—and revelations. Of every kind. And this is what sucks you in. The subject matter is compelling enough on its own—will the brilliantly slippery Richard Nixon reveal anything incriminating? Will the country get the trial it craves?—but you throw in the human drama that unfolds—layer by layer—as the personality and character of Richard Nixon is gradually revealed…and you’ve got gold.

While much of this must be attributed to great writing (by Peter Morgan, based on his play) and solid directing (Ron Howard delivers yet another strong piece), Frost/Nixon is owned by Frank Langella, who plays Nixon. Langella, who won a Tony for playing this same role on Broadway, inhabits Nixon just as Sean Penn inhabits Harvey Milk in Milk. He disappears and becomes the man, free from impersonation and characterization. There is a texture to this performance that certainly can be traced to the years of performing the role 8 times a week on stage, as the nuances are deft and subtle and sometimes heartbreaking. The familiarity Langella has with the character is obvious. It is perhaps this familiarity that allows Langella to go deeper than the persona and seek the humanity in the man, a man who we so equate with confidence and bravado. It is in Nixon’s quieter moments that Langella is most memorable, in the moments when he lets down his defenses, and lets that humanity out, and—if just for a moment—allows a slight glimpse of what could be seen as humility. While the larger, louder scenes are brilliant as well, it is these quiet, intimate moments that are the ones that resonate.

There is no pandering here, to the left or the right. This is a portrait of a man, a complex man who answers to no one and we are dying to be let inside his head, even for a moment. Langella is so watchable, he makes Richard Nixon even more interesting than we thought he could be, and even more complex, and he makes you wonder what makes him tick, and then he reveals it, little by little, piece by piece. And then you come to realize this booming giant, seemingly all ego and arrogance, is really a broken, lonely soul, asking questions. And it is in these moments of discovery, both for the character and the audience, that the film reaches another level and becomes sublime. It is truly a performance for the ages.

It would be hard for anyone to compete on the screen with such an overwhelming presence as Frank Langella playing Richard Nixon, and, unfortunately, Michael Sheen (who also played the role on Broadway) just isn’t up to the task. Whether it’s because the character is written as somewhat shallow and vapid already, Sheen’s portrayal of David Frost comes across as simple and one-dimensional. I never really found myself invested. While we’re supposed to be rooting for him to succeed in taking down the “big fish,” I found myself almost rooting for the big fish to get away, simply because Frost is so…uninteresting. But maybe it’s this contrast that makes the film work. The complexity of Nixon versus the simplicity of Frost. The dark textures of Langella’s performance versus the light air of Sheen’s. Well, if that’s what they are going for, it works. I just wish I had liked David Frost a bit more.

Still, even though Sheen falls short, the rest of the cast, while somewhat peripheral, is strong, especially the always-good Sam Rockwell and the surprisingly moving Kevin Bacon. Is it just me, or does Kevin Bacon just never hit a wrong note? And while Langella is the star of the show, this film is the complete package. The script is tight, the pacing is brisk and the score is unobtrusive. This film grabs you from the beginning and sucks you in, keeping you engaged until the final act, when the burning embers become a firestorm. Much like Richard Nixon the man, this film is far from one-dimensional.

Overall, Frost/Nixon offers many things, from a brief history lesson to those who may not have lived through the tumultuous time known as Vietnam or Watergate, to an insight into one of the twentieth century’s most compelling public figures. But, mostly, it is a riveting portrait of two men who face their humanity in very different ways, and learn the meaning—and the price—of ambition. Happy Inauguration Week.