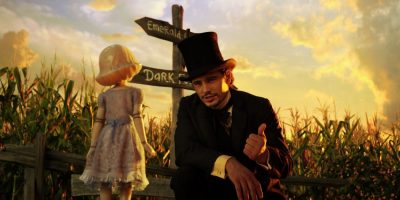 So here’s the thing. I don’t get paid to do this. I work a regular, full-time job and I go see and write about movies in my spare time, the time I save to do things I want to do, the things that make me happy, the things that make life worth living. I am quite protective of that free time. I am equally protective of this love of movies that has been borne in me since I was 12. People often ask me if I would want to be a movie critic full time, if I would want to be paid to see all the movies and I fear my true answer would be no, because then I would be exposed to all of the foulness that can come out of Hollywood. I would actually have to see Nicolas Cage movies. But, because I am beholden to none, I am able to pick and choose what I spend my hard-won cash on, and, more important, what I choose to spend my precious time on. I have yet to lay eyes on a single Transformer, Saw or Twilight movie in a theatre and that, I’m sure, is leading to a longer, richer life for me.

That’s not to say that I believe I’m a pretentious movie-goer, only going to see Oscar-caliber movies. I am one of the few that paid full price to see Reno 911: Miami, after all (and don’t regret it). On the other hand, I don’t sleepwalk into every movie that is praised by critics either. I still have not seen this year’s Best Picture contender and Best Foreign Film winner, Amour, and I may never see it. It just didn’t draw me in and that was my choice. I have the luxury to be driven by any number of reasons to go to a movie, be it critical response, a director, a story, or, most often, actors. But, even then, I use discretion and personal judgment. For example, I have seen every Jessica Chastain movie that has come down the pike. But Mama? Nope, just couldn’t do it. And no matter how much I adore Daniel Craig and Rachel Weisz individually, not even I could lay down $15 to sit through a double-billed Dream House last year. So I am not totally lacking in reason.

Which doesn’t mean that I don’t occasionally stumble into a stinker. Snow White and the Huntsman seduced me with Charlize Theron and dazzling special effects. I absolutely hated Crazy Stupid Love from 2011, despite it being packed with great actors. I fear for the awful possibilities of Admission, the movie coming out soon starring Paul Rudd and Tina Fey, but those actors will probably get me to cough up the dough. I do not go in blind and am rarely ambushed. But last night I was not only ambushed, I was cold-cocked with such spiritual force that I am still reeling.

But I should have known better. There is a reason I hadn’t been to the movies in 2013 yet. There is a reason I’ve been catching up on Netflix and using my weekend evenings to visit with friends and family. Even now, my calendar sits on my desk, mocking me. Everybody knows March 15 is WAY too early to go back. The irony being, of course, that by March 15, I am usually aching to go back, longing for the dimming lights and enveloping darkness of the theatre. I miss movies. But it was only March 15 and I should have known better. I allowed that little voice inside my head to win out, the one that repeats to me, over and over, “…but Gladiator came out in March.” For the record, that voice has caused me more damage than the one that says “go ahead, you can eat just one.”

So, last night, I closed my calendar, ignored all better reason and judgment, and took a chance, giving into my cravings and I went back to the movie theatre. You know those people who do really stupid things and when bad things happen you find yourself shaking your head, mumbling, “they had it coming?” Yeah, that’s me.

No, I’m not seeking pity. As I’ve said, I knew better. But I’m hoping my gross error in judgment may save others from a similar fate. I want to do a service here, do something for my fellow man. So here it is, my message to the human race: do not be seduced by Oz the Great and Powerful. It will be 130 of the most wasted minutes of your life—even a root canal, while painful, results in something beneficial.

There is far too much wrong with this movie to go into detail. I remember thinking I wish I had brought a notebook with me so I could detail every little disaster along the way. But even then, I would have gotten writer’s cramp. But let’s just say I haven’t seen wasted talent or potential this severe since Barry Levinson’s Toys in 1992, which, up till now, had been my movie poster child for wasted potential.

I’ll admit to several things here that are totally my fault. One, this movie had three of my favorite actresses in it, actresses who usually do not star in big, Hollywood blockbusters: Mila Kunis, Michelle Williams and Rachel Weisz (each of them an Oscar nominee, and one—Weisz—an Oscar winner). Two, the trailer for this movie—which, admittedly, hit me at a very vulnerable time when Oscar season had just ended and I knew I was entering the Cinematic Death Zone (January through March)—was terrific and I allowed my emotional reaction to it to override my common sense. And three, as I mentioned already, I was aching to go back to the movie theatre. So I take all the blame for ignoring the signs and following my heart.

But I blame this movie for everything else.

Oz the Great and Powerful epitomizes everything bad that Hollywood can be. It is massively sexist, overblown, overdone, and totally lacking in charm, heart or passion. The 3D that I paid extra for adds absolutely nothing. The actresses that lured me into the theatre did the best they could with a script that panders to the worst movies have to offer in terms of gender roles, modern political correctness, the raping and pillaging of our memories and whatever Hollywood thinks the kids want to see these days. The special effects are good, but you never for a single moment are taken into this world. It just feels like you are watching something that kept a lot of people employed for a long time. I didn’t stay for the credits, but I bet they ran for a while. Not that employing people is a bad thing, but suckering us in to lay down $17 for this giant turd is.

Whatever you do, please don’t make the same mistake I did. Use your common sense and stay far, far away from this one. Let the calendar turn to April and, even then, be careful. You never know what may still be lurking in the dark.