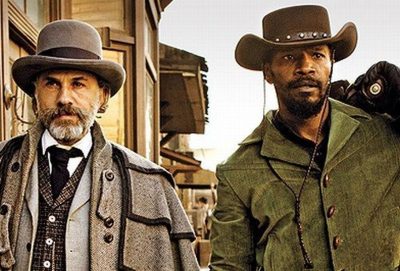 Other people seem to be getting much more out of Django Unchained than I did. Don’t get me wrong, I love Quentin Tarantino movies, so I knew what I was getting. In Django Unchained, I was expecting to get Tarantino’s take on the spaghetti western, which I got in full. But some others are also seeing a giant manifesto about racism, slavery and our national history of violence.

Sometimes, a cigar is just a cigar.

However, to be fair, I will confess that I do see the thematic similarities between Django Unchained and Tarantino’s last effort, Inglourious Basterds. I’m not Jewish nor a descendant of anyone affected by the Holocaust, but I can tell you that I imagined how good it must have felt, at the basest emotional level, to watch the final scenes of Basterds—where the highest Nazi officers, including Hitler, are gunned down in a violent bloodbath—play out. Basterds was the ultimate revenge fantasy and Tarantino, to a certain degree, continues with the theme in Django. But this time, instead of Nazis, it’s American Southern slave owners and those who abided by their torturously racist practices.

But I just can’t see this movie as a grand statement about racism or slavery. Instead, I look at it the same way I look at Inglourious Basterds: it’s a revenge fantasy where we get to go back in time and pay it back to those who were inhumane, cruel and evil. There’s really no need for subtlety there, not much room for poetic discourse or thematic commentary. This is just violent playing out of our deepest, darkest dreams, simple as that. We’re coming back to kick your ass, and doesn’t it feel good.

And what I love about Quentin Tarantino is he is able to turn these violent wet dreams into genuine entertainment, in spite of their callousness, crudeness and ugliness. Django Unchained is filled with humor, jokes even, which lightens the emotional load and his unique style allows you to bask in the absurdity—you’ll never hear the “n-word” spoken so many times in a major motion picture, I promise you—and just go with it.

One of the differences between Django and Basterds, and I’m sure this is what those who are discussing Tarantino’s growing maturity in tackling subject matter such as this, is that you saw Nazis in Inglourious Basterds, but there were no death camp scenes, there were no mass graves, and, save for the opening scene, there weren’t even scenes of the Nazis killing anyone. It was all referenced because we knew who the Nazis were.
In Django however, Tarantino wastes no time showing us what slavery is, up close. There are no veiled references here, no understood meanings. No, he decides we need to see exactly what slavery is. He makes it personal.

And that’s what Django is: personal. It is a story of one man, a slave, who gets his freedom, courtesy of a white German bounty hunter, played with magnificence by Christoph Waltz, and goes in search of the slave owner who now owns his wife. Jamie Foxx plays Django, the freed slave, and he is quiet and sturdy and doesn’t really blossom until the final act, but he serves the part well.

There is much more character development in Django Unchained than there was in Inglourious Basterds–I feel like Basterds was more a reflection than a story–but they basically follow the same arc: set up, journey, payoff. They each are tremendously entertaining, but I have to say the cathartic climax in Django is far less satisfying, as is the journey itself, which is too rambling and goes on far too long.

But what both movies feature is another Tarantino staple: exceptional performances. Just as Inglourious Basterds made a star out of then-unknown Waltz, Django Unchained should make huge stars out of two excellent actors named Leonardo DiCaprio and Samuel L. Jackson. Wait…what? Well, you’ll have to forgive me because I’ve never seen DiCaprio or Jackson quite like this. Samuel L. Jackson is even better than he was in Pulp Fiction, and that’s pretty f***** good. But the star of this movie? Leonardo DiCaprio steals every scene he’s in and that says a lot in this movie, with so many great performances. I’ve never seen him so loose and relaxed, even having fun. I didn’t know he had it in him. And yet, his skills as an actor shine brightly as he plays a villain—a truly despicable slave owner with a penchant for mandingo fighting—who we just can’t help but love, even as we look forward to his bloody comeuppance.

In the end though, Django Unchained is probably my least favorite of the Tarantino movies. It’s far too long, needs a lot of cutting and Tarantino really needs to stop giving himself roles in his movies. But the rest of the performances are great and it’s exactly what you expect from a Tarantino movie: violence, style and shameless entertainment. I’m just not sure you’ll get much more than that, no matter what anyone says.