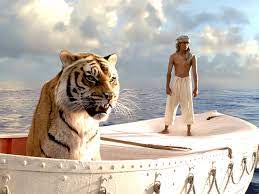 I’ve always prided myself on writing spoiler-free reviews, so forgive me. I’ve just blown the whole point of Life of Pi, director Ang Lee’s new movie. But, thankfully, the point of the movie is not, well, the point.

This now makes two movies this year based on insanely popular novels, deemed to be “unfilmable,” that have challenged their audiences to check reality at the door and surrender themselves to the power of storytelling—and of parable. Cloud Atlas was ambitious and large in scope. Life of Pi, while equally ambitious, seeks a smaller focus, less about scope than emotional connection. And here is where Ang Lee succeeds where the Wachowskis and Tom Tykwer didn’t. You’ve got to make your audience care.

And how does Ang Lee make us care? He doesn’t just tell us a story, which anyone could do, really, but he gives us an experience, from the first frame to the last, that is undeniable. If there’s one thing Ang Lee has proven, it’s that he can do anything, from Hulk to Brokeback Mountain to Sense and Sensibility to The Ice Storm to Crouching Tiger, Hidden Dragon. He breaks out his entire toolbox of skills here, creating a film where art meets craft in the most sublime ways.

The storytelling here is pretty straightforward and simply told. The story of Pi, a young Indian boy, is told in flashback, by Pi as a middle-aged man. We see the story unfold as he tells it, relating his incredible tale of having been lost at sea after the freighter he and his family were sailing on sinks during a violent storm. The freighter was carrying not only his father, mother and brother, but dozens of animals from the family zoo they were transporting. There turn out to be only a handful of survivors from the ship’s sinking, Pi the only human. We learn pretty quickly how nature’s laws play out when a sampling of species are forced together on a lifeboat. In the end, only Pi and a giant Bengal tiger remain and they both must learn to survive with and in spite of each other.

That’s pretty much the story of Life of Pi: how a boy and a tiger survive together on the open ocean. But the experience of Life of Pi is how this simple tale becomes a visual extravaganza, courtesy of Lee’s adventurous filmmaking, Claudio Miranda’s gorgeous cinematography and the perfect use of 3D, not used this well since Martin Scorsese’s Hugo last year. It is a feast for the senses, a ballet of special effects against a canvas of sky and water, a dreamlike kaleidoscope of nature and fantasy.

This movie is not a casual night out at the theatre. People connected so much to the novel, I would guess, because of its emotional resonance and while I haven’t read the book, the movie does connect on a viscerally emotional level that becomes, at times, almost unbearable. Tales of suffering are hard to watch no matter what, but you factor in animal suffering and emotions deepen tenfold—at least mine do. The filmmakers do a good job avoiding graphic portrayals of “natural selection,” but the references are clear and effective. Life is cruel, nature crueler.

But I trust Ang Lee. I trusted that he wouldn’t—and couldn’t–make a film that wallows in suffering. And he doesn’t. Life of Pi is a movie about all of life—and death–and it revels in its beauty and amazing capacity for transformation, inspiration and connection. This movie is so rich with interpretive possibilities—the definition of a parable, after all—but the part that is undeniable is the outsized and emotionally riveting cinematic achievement that it is.

There is a sort of “twist” ending that seems to have infuriated a few, but, for me, the experience of this movie is just that—the experience. Life of Pi is an achievement of great filmmaking and doesn’t pretend to be anything else. Just like any other parable, what you take from it is totally up to you.