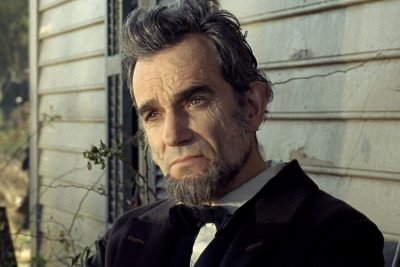 It shames me to admit this, and most likely will shame my parents even more, but I know next to nothing about American history. I’m sure it’s a fault of circumstance and/or geography, but it remains true that I know more about Martin Luther’s 95 Theses than our 27 Constitutional amendments. Which made my anticipation for Steven Spielberg’s historical epic Lincoln all the more tangible. I wondered how lost I would be or how invested I would feel during a movie about something I knew so little about. See, what I knew, and what others may not have known as much, is that Lincoln is not a biography of our 16th President. While he is the main player, the story is actually about the controversial and bitterly fought battle to pass the 13th amendment—the amendment to abolish slavery—cast against the backdrop of Civil War. While I of course knew of the amendment’s existence, I knew nothing of its coming to be and was trusting in writer Tony Kushner to bring me in and tell me the story in a way I could not only comprehend, but be moved by.

Well, despite his best efforts, Kushner’s complex telling of the labyrinthian methods and machinations that went into garnering votes for and against the amendment—as well as all the reasoning for each position—left me feeling only slightly more educated than I was when I walked into the theatre. But let’s all be honest here. I didn’t pay to see a history lesson. The movie tries, and it tries hard, to put up a respectable face, with an amazing ensemble of who’s-who actors and pages upon pages of dialogue meant to color in all the space between the lines to help us truly comprehend what is at stake and the historical significance of the vote, but that’s all really beside the point. This movie is only one thing: Daniel Day-Lewis’ portrayal of Abraham Lincoln. It is all you care about and it is all that matters.

Many movies have been made about powerful men through history (sadly, the movies about powerful women through history are painfully slow in coming) and they rely on one thing to tell their story: developing a relationship with the audience. If you don’t know him, you can’t understand him. And if you can’t understand him, you can’t care. It was true in Patton, it was true in Gandhi and it’s now true in Lincoln. Hmmm…those three seem to have something in common. And, come February, they most likely will have another: Oscar.

I remember the first time I heard about this movie a year and a half ago. When they said the three words “Spielberg,” “Day-Lewis” and “Lincoln” in the same sentence, I knew we were going to be here. I knew it would be the Best Picture front-runner, I knew it would get all the attention and buzz, and I knew it would knock socks off. Widely considered the best actor of his generation, playing the most respected and beloved figure in our country’s history, directed by the preeminent director of his generation? How could it go wrong. And yet the movie is nowhere near the encompassing achievement you would expect. With all that going for it, Day-Lewis still manages to walk away with it and make it a movie solidly about performance and not much else. When you can take Spielberg out of the conversation, that’s talent.

It’s such a cliché to say that an actor disappears into a role. But we keep saying it because it is so rare and when it actually happens, it just takes your breath away. This is one of those parts that comes around once in a lifetime and it requires a truly great actor to deliver on all the possibility for nuance and depth that a role like this demands. Daniel Day-Lewis delivers. I’m not an expert on acting, but it’s probably safe to say that this role will be considered a master class someday, if not already. He is able to communicate all the despair, optimism, thoughtfulness, burden, doubt and responsibility of a man at the height of his political life and all the guilt, compassion, insecurity and sorrow of a man in conflict with his personal one.

The best moments of Lincoln are unquestionably the ones where Day-Lewis portrays our 16th President as a man carrying the burden of history. How does one reconcile the practicalities of politics with the realities of war and the responsibilities of leadership? According to Lincoln: carefully, thoughtfully and confidently. Day-Lewis’ performance here is the opposite of his award-winning scenery-chewing in There Will Be Blood, as he goes with the slow burn instead of the raging fire. And the treat here is watching those embers flicker, from moments of impish pleasure when he tells his stories (knowing everybody has to listen because he’s the President) to the haunted awareness of the thousands of men he’s sent to death in battle.

Disappointingly, though, Lincoln is about much more than the President’s personal navigation of the burdens and responsibilities of power. Kushner, who is most famous for writing Angels in America, bogs the screenplay down with the minutiae of politics and backroom deal-making, making it feel more like a play than a movie. That’s not necessarily a bad thing, but when the scope is this large, it is distracting to be focused on such small moments when you need to keep your audience engaged in the bigger picture. The movie is too long and too talky and should have given us more Lincoln and less legislation.

And as for Spielberg? He keeps himself on a short leash, thankfully, staying far away from the over-sentimentalization that he can be known for (see: War Horse and every other Spielberg movie ever made), and lets the movie be about the performance. In addition to Day-Lewis, he crams the film chock full with known and talented actors—too many to name—and each one delivers, especially Tommy Lee Jones and a perennially under-rated Gloria Reuben. (According to the credits, even Kevin Kline makes an appearance as a wounded soldier, not that anyone noticed.)

Spielberg’s choice of shooting in naturalistic light was brilliant, and allowed cinematographer Janusz Kaminski to shoot a very dark but utterly authentic-looking film, featuring some of Kaminski’s best work to date. Sadly, though, it seems I have to say that I’m over John Williams. Seems blasphemous, considering this is the man who composed the themes for Star Wars, Jaws, Superman and Raiders of the Lost Ark, but, in light of all the inventive and fresh styles of film scores recently, his traditional approach now feels tired and done. I long for a Spielberg movie to sound different, just once.

So maybe Lincoln wasn’t everything I was hoping it would be. But, strange as this will sound, it actually was exactly what I was expecting it to be. I was expecting a well-made film, filled with history and conflict, featuring a lead performance that would be one for the ages. It’s certainly not perfect and it might even bore you here and there, BUT….if you care at all about great performances, you simply cannot miss this one. You don’t need to know history to know a great performance. You just need to see one.